Although Liongrat is the famous route, I haven't found any completely percise map or topo. But some good info can be found here:
http://www.jmsola.net/cervino/ 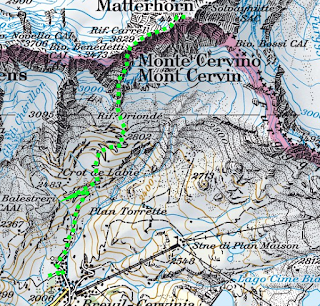 Dandy finally got free weekend for his friends and we could go play outside. Matterhorn wouldn't be my first choice, but if mountain guide tells you: "Come with us, it will be your exercise tour.", it would be stupid to say no. Indeed, going there with somebody that knows the route is more than reasonable -  route finding is not trivial. Let me quote this on the beginning: I have deep respect to the group of Italians lead by Jean-Antoine Carrel, that firstly climbed this route.


I got that opportunity to lead some parts of the tour, while Dandy was patiently fixing each single mistake of mine. It was a great school. But I was at least lucky about weather, so the first part from Breuil to Rif. Carrel passed without any troubles. Some details follows: in Breuil, follow the valley with the river for a while and than asphalt route turns left into serpentine. There is few simple rocks above Rif. Orionde, but nothing to worry about. Also large snow field is not that steep as it looks from bottom. Quite tricky part are the slopes before Leone pass that have to be traversed, but if you stay close to the foot of Leone's faces, there is a quite good possibility of belay (equipped by bolts).


From the Leone pass, there are a few technical sections, but nothing serious even for weaker climbers (I cannot advice non-climbers to go this tour). This pays for the entire Liongrat: if there is something difficult, there is a fixed rope. Actually, the climbing sections is not what one should worry about, way more scary are steep sections with brittle rock where is no belay and nothing to hold. One just has to pray, walk steadily and pray again. Some of my friends can not understand this problem, although I am explaining it again and again: The most difficult ingredient of alpinism is walking. And the Matterhorn is a good example of mountain where walking is the problem.

Few words about Rif. Carrel. Beutiful place, but crowded. The ones that come soon get a bed, the ones that come later will get a bed as well, but with somebody already in (and there are not many girls). The even later ones will not fit in the hut and most probably will be forced to descent. Be there on time (before 1 pm).

I was quite curious what happens when all of these 100 climbers that slept at the hut will start to ascent. But it wasn't that critical. Half of the people is anyway lost somewhere in the faces of Matterhorn (helicopters are flying around like flies) and second half will learn common sens and turn back. We didn't although the weather wasn't optimal. We could afford it because Dandy climbed it already several times and was able to judge it. We were also very fast, although we were three. So we got to the summit sooner that I realized where I actually am. Jordan ladder is slightly overhanged at the beginning, but again, nothing to worry about.

Summit is perhaps nice but we couldn't judge with all the wind and mist. We spent there maybe 5 minutes. Usually, the Hoernligrat is used for descent. Bit there was bit of ice and snow on the stones and they turned to be very slippery. Under such condition, it is not worth to descent on Swiss side. There is even more dangerous "walking".

Last few words: Matterhorn is usually considered as dangerous mountain because of very brittle rock and unstable weather. The second is definitely truth, our weather forecast claimed completely clear sky and no wind. The brittle rock, yes a little bit, but not as much as I imagined. Some sections are very scary but there are just a few of them and the rest is quite enjoyable in a good rock. People there are also not that annoying as I expected. It is actually not that bad, I can imagine to go there again. Maybe rather not in Kilian's style.