Italian side of the Bernina mountain range is not so frequently visited and generally speaking, Piz Bernina and its side summits seem to be the less climbed high alpine summits. The solitude and long distances are giving special spirit to this place that can not be simply seen or felt only from pictures. I can very well imagine spending a life just by exploring this area and climbing all of these high summits. Even better would be to have a base camp in Chiesa di Valmalenco, like my friend and climbing partner has. This town is just first class. 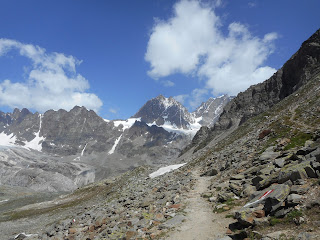 As mentioned, accesses to the foot of Bernina mountains regard a lot of walking. Somebody might not like these long tours, but on the other hand, reward in terms of success on some of the peaks is huge. I can not however judge it since we didn't reach any of the summits. 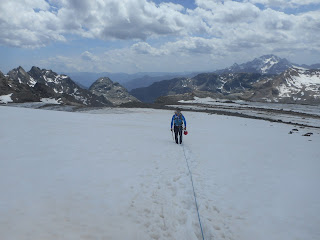 I won't  defend ourselves with breathtaking stories about our courage and strength. No. Simply, we were just not brave enough to go that steep (40 degrees) slope below Rif. Marco e Roso. It was 4 pm when we arrived to that place and small avalanches swept down the track set by other climbers. The decision to turn back didn't take me long when one of the avelanches fell down right in front of me. And I do not regret this. We were searching for couple of minutes for via ferrata that shall lead safely over the crag on the left side, but we were perhaps too low. If I regret something, then that we didn't take little bit more equipment to try to climb that crag directly. 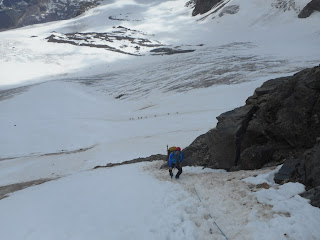 I never criticize any other group of climbers. I also know that when somebody die in the mountains, it doesn't necessarily be his fault. And I won't do it this time neither. Nevertheless, if by chance somebody from the group that met us up there is reading these words (the small dots on the upper picture), please try to think if you did some mistakes or not. It doesn't matter if you reached the summit or not. Taking some portion of risk is also fine with me, but still, one should always proceed in a most safe way.

We returned to the lower hut...

If we were not brave on the first day, we were total chickens on the second day. The weather forecast was terrible and we knew it. But Piz Palu is another nice summit and our planes evolved in that direction. However, when we reached the pass above hut where 'Alta Via' leads we decided to descent rather down due to few drops of rain. Well the clouds were also bit gray and the snow was super-soft. In the end it was completely sunny when we reached the car at Camp Moro. The mother nature is sometimes just kidding me I suppose. I see her laughing deeply. 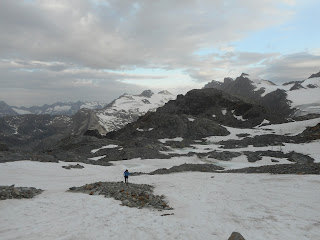