We had a very nice summer climbing trip to Vogesen full of nice adventures but rather than talking about them I describe very briefly only the climbing part of that.

The map of the region can be found here:

there are two challenges which we wanted to achieve: 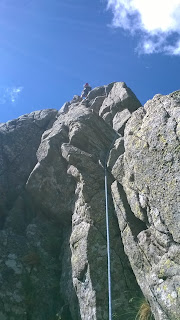 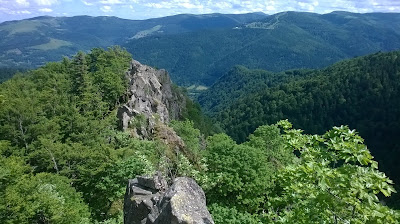 It is a long tour over the two climbing steps and several boulders. If one checks the map above it starts at the point where "Reidwald" is written and follows the ridge up to Le Hohneck. I have already climbed it once in Winter with Martina when it can turn to real alpine tour, see
Spitzkoepfe

There is no clear way haw to begin. One can basically get to the ridge very easily by the forest from the east side (what we did in Winter). But as it is summer, we wanted to do it little bit more adventurous this time, so we climbed from the south side (first climbing step, two pitched at III-IV level). Then just follow the ridge, very easy climb/walk. One can either use the clear path which always go little bit on the left side in the forest. But then it is just walk and not climbing at all. We tried to follow the ridge really very precisely what means to do some very funny boulders. We got bellow the second climbing second step after few (4-5) hours. The step is last technical part of this route, again climbing at level III-IV, (still doable in trekking shoes).

NOTE: one needs to take his own belay!  Count on 30 meters of easy climb. For me it was some belay every 4 m. The rock is great, you always find something.

Night in the forest bellow Martinswand. Lot of insect. Lot of fun.

it is real classic of Vogesen. I believe that also this wall has a nice history of its first ascents.  I actually haven't found any nice topos of this region. But don't worry and just go there. There is a plenty of climbing routes of each level. Very nice can be very top part, where is a lot of easy one-pitch routes, some of them are quite long. We tried 5a route named with very nasty name I can not publish here.

I was already quite happy with that but Venca wanted to climb more and more, so we climbed in the bottom part. Finally, he climbed some rally tough route (6b) and I was just belaying (shame on me, but I wouldn't be able to climb this I think). Suddenly, some German guy appeared. He looked like a kind of wild person with few fingers missing on his hands. We talked a little bit about the area and he told me that Messner visited Spitzkopf as well. Then he climbed with his girlfriend the same route as we did that morning. I saw clearly from his movements that he is more experienced than us. 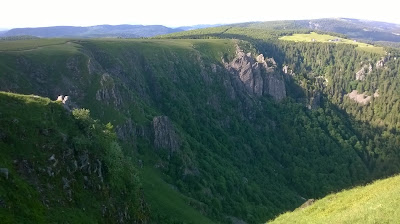 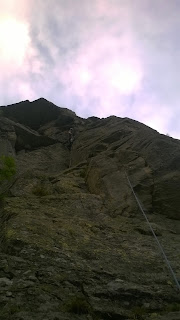 When we were leaving the area back to the parking place at Gaschney, we followed one older men with pretty bad coordination. Well the path wasn't that easy for person in his shape. He was there with some Alpinveraine which left him alone in this mountains (WTF?) Let me note that I understand and respect him for his passion to go to the nature even in this shape and I hope I will do as well in his age. But any Alpine club shouldn't leave their older members alone in such situation.
Posted by javor at 2:40 PM

Email ThisBlogThis!Share to TwitterShare to FacebookShare to Pinterest
Labels: Vogesen