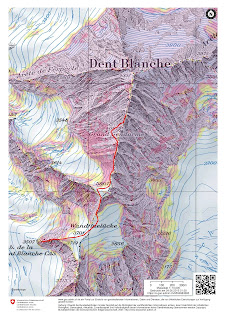 One can see the exact route depicted in the map above.

No, this wasn't really possible. The day after? Maybe. But not at the day and in the conditions we have tried that. But we are happy for this experience anyway...

We started down in the Valley at the parking place at altitude of 1830 meters and did the long trip up to 3507 meters at the first day. The route to Cabane de la Dent Blanche is not dangerous or difficult (I would say even in Winter). One can see breathtaking scenery of crevasses of the Herens glacier and white desert between Dent d'Herens and Grand Combin. We couldn't see the summit of Dent Blanche as it was mysteriously hidden in the clouds and therefore we had no clue about the amount of snow loaded on its west face.

My persistent watches were ringing at 3:00 and we had to wake up. The Cabane was empty (June is still out of the season) so we prepared the breakfast by ourselves.


Once you reach the pass, the famous north face of Matterhorn is standing right in front of you. We couldn't enjoy this view for very long time as the mist and later also strong wind with snowfalls arrived unexpectedly. The weather forecast promised clear blue skies but the Nature had different intentions with two naive climbers on the south ridge of the Dent Blanche. After a while, fresh snow was hitting our faces with help of 50 km/h wind, but we continued. We climbed around Grand Gendarme with lot of non-christian words flying around.


I was freezing at one of the belay stations when I saw Mrqa's crampons falling down from the ridge deep into the west face. Again, few nasty words followed that incident and we both knew that this is the end of this ascent. Mrqa spent some time to search for his crampons but not successfully.

The descent back to the Cabane was quite ok. There si not really dangerous place at the route so it was doable without any problems. It was little bit more tough for Mrqa without the crampons but he managed with any fall. Only difficulties we had were in the pass at ~3700, where we were forced to use gps tracker because of the mist.

When I looked back to the mountain next day morning, I understood clearly that we would have hard times if we had continued higher. There was unexpectedly too much snow at the ridge. I understood and learned that once we did good decision and turned back. 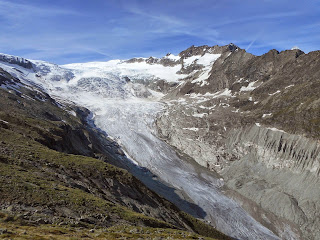