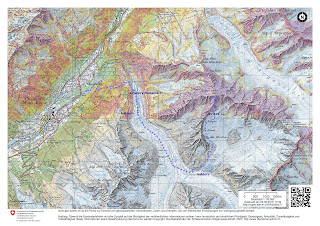 I am not writing this contribution as an alpinist because this mountain proved me that I am not. I am writing this rather as a guy with senseless and stupid dreams. These dreams brought me to Aiguille Verte and left me and my friend Mrqa there for exhausting 40 hours. Please read this text and feel free to express your opinion about our mistakes.

I don't want to spent too much time with the description of the access to the Refugio Couvercle. We started our trip at the altitude of ~1000 m down in the valley in Les Bois and used the route over Moraine of the glacier Mer de Glace. We had to use our crampons only at the bottom of the moraine where it is quite slippery, otherwise it is nice and easy walk. 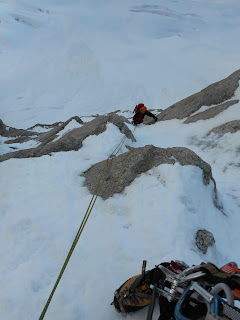 More interesting story began at 2am in the morning when we left the Refuge and we ascended over the Talefre glacier up to the Moine ridge. I was quite sceptical about the upper part of the glacier but Mrqa finally found the way between the crevasses and we safely reached the point where the route begins. I took the leadership at first pitches as I spent a lot of time with studying the route. This part was really enjoyable without any technical difficulties but very exposed. Then we accessed the no named culoir on the right which can be climbed free. We reached the first snowy ridge very smoothly (just with one mistake when we had to turn back) in 3600 meters at 7am. 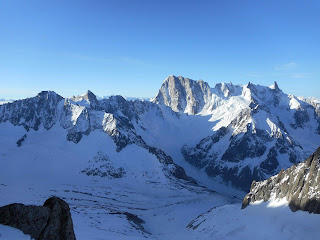 We understood with the first snowy ridge that this will be though but the snow was still hard enough so we continued without any doubts:  "Hey Mrqa, should we turn back?" was my question at this point but I wished for the answer that I actually also got "No way man. I want to go up." And I think it was right decision because the situation was really o.k. at that point. 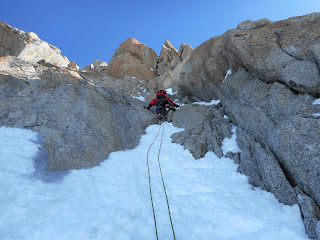 So Mrqa took leadership over yellow granit rocks on the left from the ridge. There was one icefall which we attempted to climb but than we picked up just a little bit easier route over the rock. This didn't cost so much time and we reached another series of snowy ridges at around 9 am. Some of them were very scary and we moved very slowly on them. The snow was already very wet. Mrqa built a belay station at the end of one ridge. Just when I approached it, the block of snow fell down with me and only the rope saved me before falling into the valley. Up to this point I was totally o.k. Thereafter, I had my doubts and I really didn't wish to descent vie Moine ridge back.

This was actually just the beginning and both of us tried the quality of our rope and belay few more times during that day.

Afterwards, we continued over the step on the following picture from the right. It seemed quite easy but we had to turn back few times to try better alternative. It was also already quite late, maybe 2pm, and the snow condition were terrible. At this point, it wasn't the summit which pushed us forward but the Whympher culoir which should be much safer for descent. 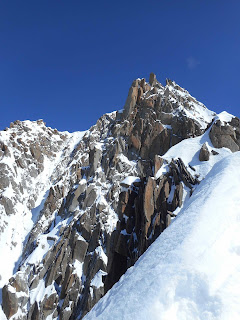 I made my last picture at 5pm looking back at the Moine ridge without believing that we have done that. Everything was covered by a mist later on so I don't have any pictures.

With every other technical problem, we wished that this is the last one. But it wasn't. There was another and another. Never ending series of snowy ridges diving me down into doubts. My watches were displaying altitude of 3750 meters for the last 3 hours. Thus, we also didn't have a clue how high we actually were.

Another snowy ridge at 7pm, hopefully the last one. But impossible to cross. No in these conditions. We had to descend 20 meters bellow the ridge and try to find better route over the rock. But this was climbing at level of V in boots and after exhausting 17 hours without any break. The mist was everywhere so we didn't see anything. I had Whympher culoir right in my mind but my mouths were somehow expressing something different: "Hey my friend, let's go home." And Mrqa without any complains rappelled that few meters down (leaving there a red loop).  I tried to call my girlfriend, but no signal.

What continued was a 23 hours lasting descent with only 30 min break in the snowy bivouac. We lost our own steps and spent few hours in the night at one place to find the correct way. Even in the morning the daylight didn't make it easier but our choice was fortunately correct. Before we got to the no name culoir we saw few people, most probably searching for us. We tried to contact them but they were far away. It was 4pm when we rappelled down to Talefre glacier. However, it still wasn't the end of the story. Mrqa fell to the crevasse but fortunately not that deep. I crossed that crevasse and following 100 m by crawling.

We reached the Couvercle at 6pm. We were surprisingly not totally exhausted after those 40 hours but maybe more on our psychical limit. Happy and disappointed at the same time. We didn't know where we turned down and I am not completely sure even now. We can not find that rock at any picture at any webpage. What is sure is that it had to be less than 100 meters bellow summit. If somebody finds fully red loop, please let us know where exactly it is. 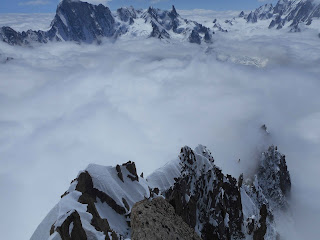 My thanks belongs to guys at Couvercle for they nice care, to mountain guards in Chamonix that they were willing to search for us and my girlfriend Martina who experienced very cruel times.
Posted by javor at 9:09 AM