The highest summit of  the Alps is quite complex topic. All the outings that aim to reach its summit(s) are collected here.

CZ version of this outing can be found here:
lezec.cz 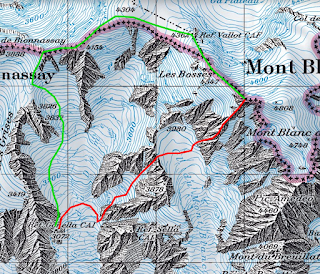 This is one of my best. Seriously. This could be compared with our attempt to climb Shkhara. Also feeling were similar. Our aim was to repeat not very well-known Alessandro-Berthod route. And we were almost successful, except of two culoirs, which we climbed rather than following original route. In this way, we invented in my opinion very safe and technically quite demanding variant of original route. 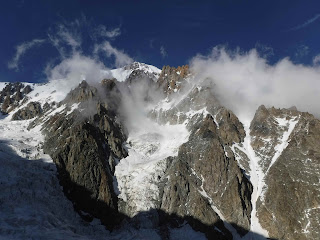 The access to the foot of the west face is little bit tricky, one has to cross quite crevassed glacier bellow the Gonella hut. This access can change each year, so I suggest everybody choose his own way.

We started our climb at 1:00, with headlights, in the terrain which we didn't know, which perhaps nobody knows. The fact that the first culoir (Carrot-cake), marked red in last topo-picture, worked quite smoothly is maybe more luck than our experiences.

The glaciated part of the route was very safe, not so much crevasses in our path. The key moment was the second culoir of the route, which was quite steep, and doesn't offer so much places for belay on the side rock. One has to use screws and snow-anchors.

Glacier and again other culoir (Paralen), added to the route by ourselves. This one I enjoyed a lot. The culoir is very narrow and one can nicely belay on its sides. There is even one nice ice step. Furthermore, I wouldn't expect any avalanche there. Stonefalls, of course as everywhere on this face. I ate all Mrkva's supplies of Paralen in this culoir, therefore the name. 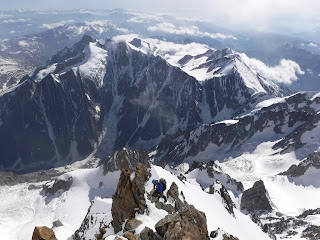 Dehydratation, frustration, exhaustion, exposure. Just normal weekend with Mrkva. The last part of this route is following Tournette ridge. Very easy rock climbing, with two snow ridges close to summit. For me, it was infinite ridge with no future. 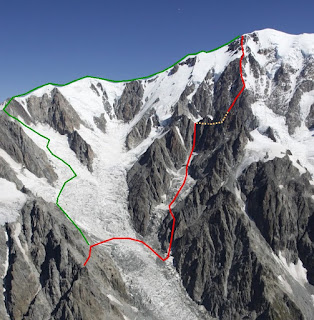 Victorious snooring of Mrkva in Vallot bivouac was making me surprisingly happy. It reminded me, that I am alive. I even didn't give a shit that I am sleeping in rubbish dump. If somebody pays a helicopter, I go and tide it. I need helicopter because I don't want to carry all the trash down. Let me know if somebody is in. 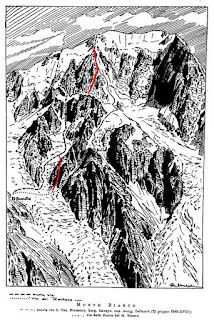 Important note: Grand culoir is safe in June when it is covered by snow, stone are however frequently falling there later in season. 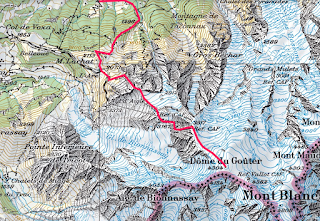 There are certain people that are able to run from valley to Mt. Blanc and back in 5 hours. It is not my case, unfortunately. I rather decided to go fully equipped and try to do it as fast as possible. 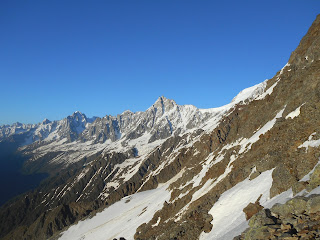 I started at parking place in Les Houches, where one can leave a car for 12 hours. I didn't expect to be so fast, but there is probably not any other option. After the pass below Mt. Lachat, one has to decide whether to go left over the steep slope or whether to follow the rail. I decided to go left, although there was still lot of snow and any visible steps. The wilder the better I thought at that point... I can not recommend that in mid June. 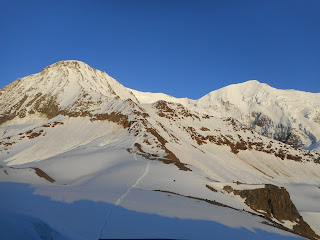 Finally, after short unintended climbing  intermezzo (I had to leave the path due to avalanche risk), the landscape opened and I could see my route leading over Aig. de Gouter to Dome de Gouter, see upper pic.

After another hour of silent walking in the frozen snow, I staid in front of mountain hut.  I found my place on bench at the terrace and tried to rest for a while. First customers of the hut woke me at 1 in the morning, and I followed their steps up to the stars. Somewhere at the ridge next to Grand Culoir, I stopped for a while, to see the snake of headlights bellow and above me. This certainly favourite summit of the Alps. 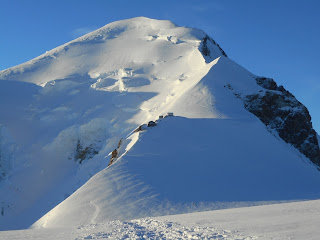 But my steps were slower and slower, my breath faster and faster. When few old-laddies took over me, I accepted that I am not in the best shape. The summit of Dome du Gouter was clearly marked by my vomits. Fortunately, it is little bit out of the main highway. Reasonably, I left the Mt. Blanc to other mountaineers, and returned back to Les Houches by the same route. Entire trip took me less then 20 hours. 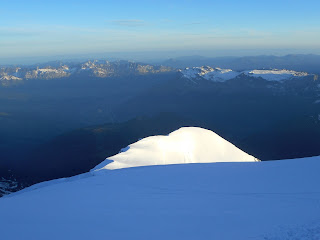