Yeah. Mt. Rosa. Intention was to reach all of its summits, finally, I am happy even with only one of them. We reached Punta Gniftety (Signalkuppe) in very bad conditions with great help of gps. We trusted it fully since it was only option due to very bad visibility. I have to admit that it works perfectly in 99% cases, which is much better than my own intuition. The missing 1% made the trip little bit more adventurous. 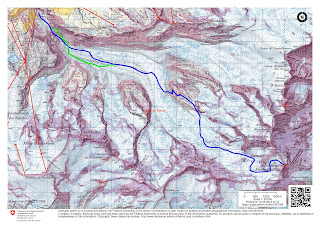 Please, have a close look at the map. I tried to draw the route chosen by us as precise as possible. This route can well be the safest one. The green path was used during descent and it can be recommended as well.

Why I am spotting this: well, when we ascended by the blue path, the gorge (see the following picture) was fully covered by snow. Scary holes appeared in that snow layer just two days later when we descended, and several parts of the gorge were drown by river. Actually, I think we were quite lucky when ascending. However, green path is safe (avalanche risk in winter). 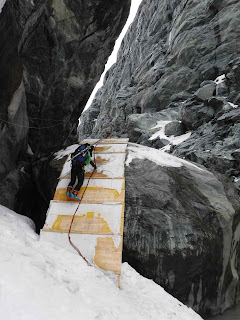 Few meters below the Mt. Rosa hut on the glacier, there is a large crevassed area. We decided  to rope up. Yes, we are little chickens and of course, we don't confess such things before girls and in pubs. (I guess most of our pub-friends would give up reading this after first lines anyway.) 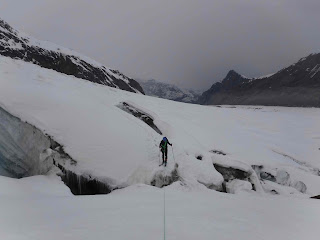 Weather was fine on Saturday, except from dense fog. The higher we were the worse the visibility was. Fortunately, I couldn't see how much is the glacier crevassed.  From certain point, we had to stop each 50 metres and ask gps locator where to go. Even though, there was one issue. We ended up in very steep slope covered by sheer ice. I intended to cross that in order to get back to correct direction. After few steps, I slipped off and fell until the Mrqa caught me into rope. This time, we wanted to be on safe side. But as you can see, bad conditions are never safe. 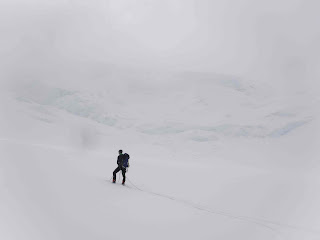 My fear even increased next morning, still on the summit in the 'Winterraum'. Although sky was blue, the wind was f..ing strong. Well, Mrqa finally convinced me, that we had to go outside and try to descend. Luckily, wind was calmer and calmer when descending. 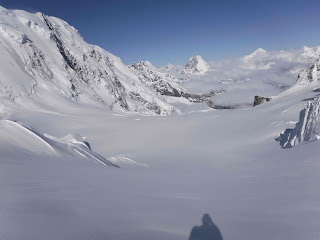 Such nice freerides, like we had, one can not see even on Salomon freeski tv. And it was fast. Better then flying. Bad conditions for climbing, but perfect day for skiing. 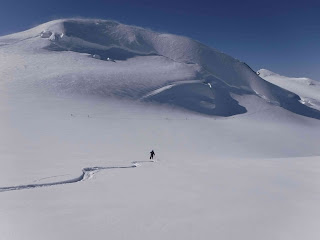 Now, I could see the crevasses. We were lucky, what else can say. 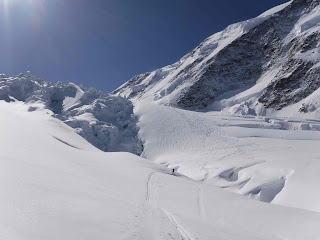 We rested for a while under the glacier and already dreamed about our next outings. This is never-ending story. Wild white desert and two pig-headed chickens. 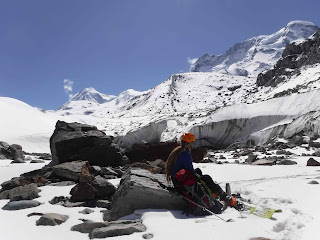