Petit Verte is definitely not wild mountain. The tour I am introducing here is rather good training than breathtaking adventure. Kind of that training, that one can not wake up next morning and only reason to leave the bed is a really big breakfast. Even though, the tour crosses the glacier that is quite crevassed and some of the slopes could be potentially avalanche areas, so better to go in group. However, I was alone. 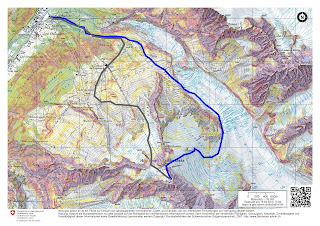 The blue path has been used as ascent, the grey one as descent. I started very early in order to have free piste in the morning. I would say, to start before 7am is actually necessary, as walk the piste up is forbidden. I left the piste after 500 meters of altitude gain, when the landscape opened to large snow fields and I continued on the left side heading to Argentiere glacier. At that point in the morning, I still haven't met anybody. I stopped for a while when my desired mountain, Aig. Verte, has shown me its west face. Pretty nice from all sides, I have to admit. Pretty scary, better said. 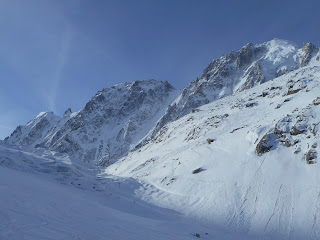 Later in the morning, first people appeared somewhere from upper station of the cable-car. Most of them planned to ascent some of the passes on the other side of the valley. The piste was actually completely empty, everybody choose rather the off-piste tour. Well, better enter the "real" nature, I agree. 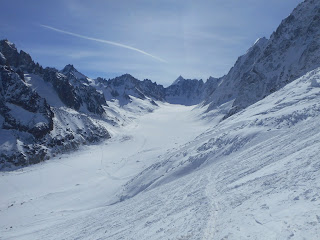 Unfortunately, nature doesn't care whether you are a good person, if you believe in god, or if you work a lot. Only things which matters are: if you are careful and if you are lucky enough. That day, it was the bad luck for some guys just 300 metres from me. I could not resolve, what happened from that distance. Nature is never safe. That's why we love to discover and observe it. Its beauty has origins in wildness and danger. Studying it too closely can mean death. 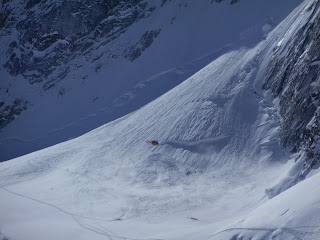 Back to my tour: the pte Vert (in the centre of the picture below)  looks quite scary from this side, but the real tour leads around quite safely.


The summit of Pte. Vert is shown on the picture below. Due to easy accessibility by the cabin-car, there is big activity on the glacier and the risk of falling into crevasse is very low. 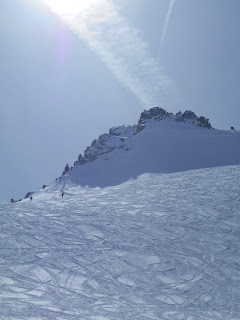 However, the final 20 metres were unsafe from my point of view, since I didn't have crampons. 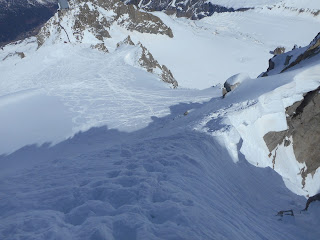