Grey path depicted in the map at the bottom corresponds to intended tour, but the reality was more green. Those 6000 m of altitude gain wasn't original intention, but as it ended up, it was condition in order to get back to the car parked in Le Chable. The red numbers in the map shows some problematic places, which I am going to discuss here. 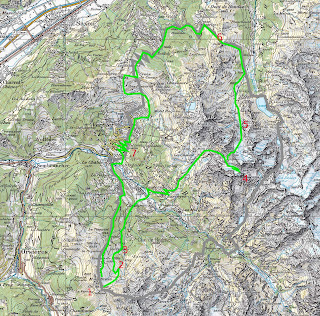 1) Col de Mille, 2536 m
The slopes bellow this pass are quite steep and crossing them could mean risk of avalanches. There is a mountain hut in the pass, but obviously closed in winter season. Wind was too strong to continue along the west ridge to the summit of Mont Rogneux. I decided to descent slightly and keep on the right so that I can join the grey line somewhere lower.

2) During the ski descent I got the place, where I had to turn and return back, because the valley was pretty rocky with steep slopes on both sides. Following the valley was clear mistake. Thus, I had to change my tour completely and forget about the intended one.

3) Just few meters lower, where forest started, I wanted to catch a path and descent to the valley. Paths at this location do not exist any more. There had to be some storm or avalanche, or both, which caused falls of many trees. Following the path was real pain in the ass  (since my ass suffered from many falls).

However, the place is abandoned in the end of winter. I didn't met any people or tracks of skies. In my opinion, it couldn't be better.

I spent a night on Cabane du Mont Fort. It is very beautiful place. I reached it when sunset. If I wouldn't be hard guy, I would be crying from that beauty. It is one of the better mountain huts I have visited. It can be however quite crowded even it is situated in lower mountains.

4) In the morning, I am rising up with two guided groups into pass, Col de la Chaux. I waited in the pass until two guides reached me, to discuss whether to continue or not. They suggested, that I shouldn't go there alone, due to avalanche risk. I rather agreed.


5) I returned back and ascended to Col de Gentianes. There is piste leading down the Tortin ski resort. This piste was however closed because of big risk of avalanched falling on the piste from the cliffs on the right. I stupidly ignored this, and dived down into rainy clouds, see picture bellow.

6) I reached another abandoned pass, pistes were out of order. The piste was in terribly bad shape - cheer ice. It wasn't however long descent on the snow, maybe 200 metres. Rest on foots, in heavy rain, until next pass. 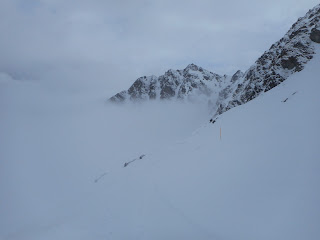 In the last pass, I reached 6000 altitude metres done in weekend. This was quite cool. I would say even frozen. You can imagine, what happens when you go from rain to snow.

7) shit at the end. Bellow Verbier, there is no clear marked path down to valley. The reason: why, when every stupid rich idiot in BMW can bring mistress up to Verbier by the highway. If I have ever money, I'll be doing exactly the same things I am doing now. Eating pizza in fasf-food and travel on my beautiful beloved skies, doing track for my wife or my children. 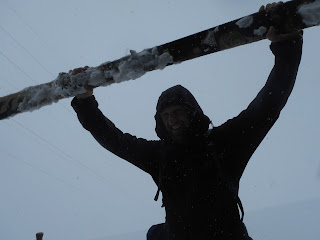