The weekend before the climbing tour reported here, me and my friends tried to attempt the summit of Ringlespitz. I have however not succeed and turned very soon at altitude of 2300. Therefore, I have nothing to report about. Nevertheless, Mrkva and Venca ascended higher, see the blog ringel-Mrkva.

Blechta-brothers wanted to spent a funny day in Vogesen (and me as well) - that means physically challenging tour with many technical obstacles.  I planned the tour accordingly. Two walls: Le Tanet's west face and Gazon du Faing. Winter routes at Tanet are described here: tanet-topo. Gazon du Faing is not reported anywhere according to my knowledge, but it offers some winter tours as well.

A car can be parked at the ski-resort Le Tanet. The Tanet's face can be seen in its full beauty from there. This is the wall. This is the Eiger of Vogesen, athough Martinswand is also nice. We intended to climb the route number 2 from the topo mentioned above. But after the first pitch, I found it quite difficult and followed more natural way to the right, see picture bellow.  The second pitch was however very funny and easy at the same time. There was even a part of it covered by ice. The last pitch was Venca on the lead, so he should judge it. Nevertheless, last pitch (especially in Vogesen) are the best part of the route.

The belay-stations were provided by spruces along the route and many great places for own belay. There is even an anchor at the beginning of the first pitch, which is located reasonably in a section, that is at my opinion V UIAA. 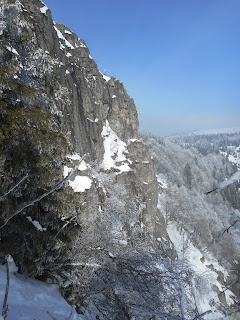 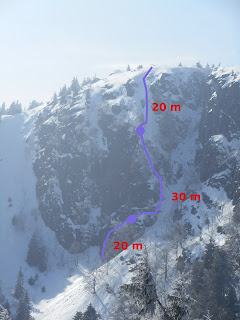 I wanted to stay on the summit since the sun was shining. Hanes wanted to relax as well. Venca wanted to climb. "Grave is a great place to relax, not these walls." And as the youngest of us ordered, we walked towards the valley of Gazon du Faing to climb another route.

We could choose a nicer route, but counting the fact that the snow was already melted and overhanging cornices at the top looked not good, we did I think the best choice. I would describe it as a walk with few climbing steps, and again, the steps over the snow cornice is enjoyable. I would however not recommend this route since it doesn't contain too much climbing. Next time, I would try the steep face  located at very right on the picture bellow.

Email ThisBlogThis!Share to TwitterShare to FacebookShare to Pinterest
Labels: Vogesen