Two-days ski-tour was on the plan with two summits: Hohmad (2421) and Tannenstock (2474). To be honest, the plan was to ascent Rotsandnollen (2700), but then we decided for the Tannenstock due to the bad conditions. We wanted also to explore the area a little bit, since there is many other opportunities for a great climb. However, the weather was very stormy which shortened our tours and made the downhill descents very unpleasant. In other words, I was bloody frightened during the descents. I couldn't see a terrain five meters ahead of me.

Nevertheless, the pictures presented here looks almost idyllic. Well, during the descents I had other things to worry about than taking pictures. In fact the two summits were reached in a gale. 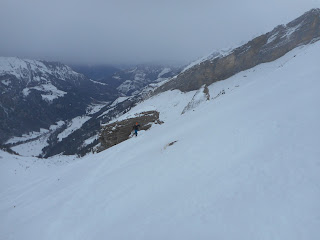 The ascent to Hohmad is very safe, even in bad snow conditions. For the first 800 metres of altitutde gain, one just follows the ski piste, which is actually not that critical, since there are wide open spaces and some possibilities to go off-piste (also for downhill ride). Some of the moves directly on the piste are unavoidable. These parts are clearly the most dangerous in the entire ascent to Hohmad. Avalanches or stone-falls are not likely at these slopes.

The ski-descent of Hohmad was pretty shity, as usual when I go play outside with Mrkva. One has to be little bit careful in the area of Hohmad's summit, especially when foggy. As you can see in the map, there is roughly 100 metres wide natural piste, but steep cliffs on sides all the way long down to the  Chringen pass. The south side of this pass can acquire big loads of snow. A small avalanche is not completely out of topic, but is unexpected. Everything depends, as always, on conditions.

The Tannalp Guesthouse provides very comfortable accommodation, but not too much to feel unhappy of some kind of luxury (it is kind of mountain hut, but not belonging to SAC). I have to admint, that comparing to other huts they serve the best food ever.

We had two hours of nice weather in the next morning. At least, I could take some nice pictures. If somebody is interested in printing them into a magazine, I can sell them for 1 euro each. Or just steal them, I'll be happy anyway. The area is amazing. I was just wondering that nobody is there. We knew that the gale is coming and that we can reach none of the higher peaks around, but we could at least study them and make some plans for the next time. Yeah, you see Barglen Schiben. That could work in summer. The other summits provide some ski-touring possibilities, certainly Rotsandnollen, perhaps Schwarzhorn, or even Graustock with little bit of climbing.