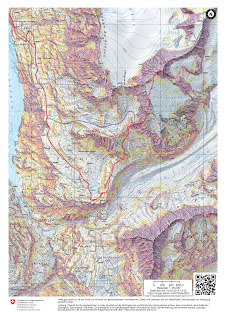 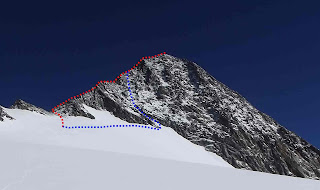 The whole trip is depicted to the map on the left and the detail of the summit part is at the upper picture. The ascent is by red and the shortcuts while descending by blue.

The summit of Le Ruinette was built on purpose to have a beautiful view of the Grand Combin's west face. We both, me and myself, agreed to climb in a great style: unsupported solo, almost naked. What does it mean? In order to wear as light pack as possible, I had no tent, no sleeping back, no rope for rappel, no climbing partner, no mum, and the most important thing in such a great altitudes, no supplement of oxygen :-). Of course I refused to stay in any cottage with nice warm bed and fondue as a dinner. I rather took a rest at the cold stone where self-prepared bread was served by me to myself with piece of chocolate from Carrefour as a dessert. To complete that fun, my handy was broken and there was absolutely nobody around.

I parked my car at parking place before the hotel Mauvoisin and I think it is for free, at least I didn't pay. On has to take the path on the left side of the lake to get bellow Le Ruinette. It is a long trip (3 hours), especially when returning back. One can just walk until the pass Tsofiert, where tiny path leads to the left and it is next 1 hour to the pass Col de Lire Rose without any technical difficulties. The technical parts starts from there. At the first ridge, I can only recommend to keep on the left when ascending. It was quite difficult for me to make a right decisions in the night. At some point I climbed something not compatible with pd difficulty. I could avoid this place nicely when descending what was better choice than end up as tomato pizza down in the valley. There are also some belay stations for abseiling.

The glacier should not be crevassed, but I found one big ice hole exactly next to the route. It is better to stay on the rope there, especially after snowing.

The summit part is again technical, but I would say easier than the bottom ridge. Even though, it is much better to use the blue variant at the picture at the top. Again tomato pizza problem at the red variant. Note, one has to judge it according to the snow conditions. That's it.

Generally speaking, it is nice easy summit. Let me note that it is worth to belay even on such an easy peak. Some of the steps are quite exposed. Also it is worth to take an advantage of belay stations for abseiling.  Good luck and stay alive! 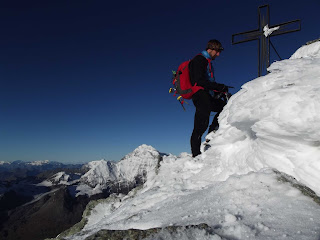 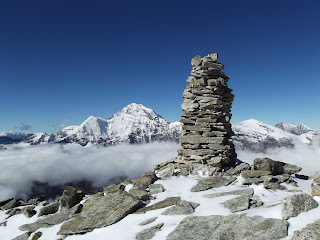