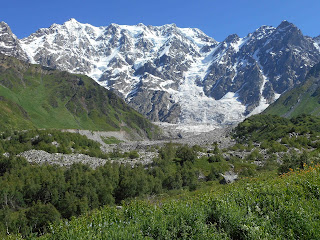 When we arrived to Ushguli with the aim to climb Shkhara-Main and I saw Shkhara for the first time, I said to myself: "hey you dare, go home to mum, this is not for you!". Well, more than 2000 meters high south face of Shkhara standing right before us made me really scared. One can not catch that feeling with a camera, surely not with that I own. One has to be there, see it and feel it. But we couldn't just run away from there. We couldn't. 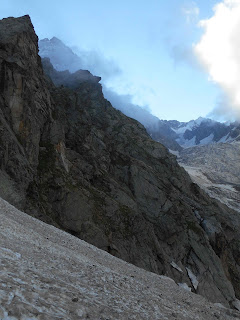 The first night was already kind of adventure. We wanted to reach the plateau of the lower Shkhara's glacier but we followed the wrong left side of the valley. When we wanted to get to the right side we would have to either go back 1.5 km to the bridge or cross a very broad river. I decided to cross. Bad decision. When I threw my rucksack over one of many arms of that river it fell down back to water and I had to jump in to safe my rucksack. My boots very completely wet and it took me several days to dry it. 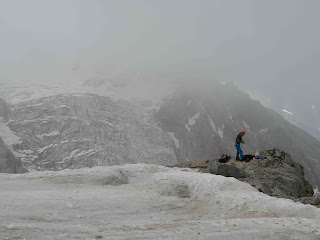 Despite the episode with the river, we reached the plateau next day and our attempt to Shkhara-main could begin. We climbed quite fast. There were no issues from base camp to c1, maybe just one place pretty high in the kamin. There is one very nice place for a tent in c1 and water source just next to it. The c1 of Shkhara-main is one of the most exposed my sleeping bag ever seen. We were about to study and discuss the details of the route to c2 for the next day when it suddenly came. Firstly just few hail stones. But after a while, we were silently lying in our tent and praying for the end. Lightning, ... fucking close to us. Incredible noise of hail stones hitting the tent. It was clear now we can not continue. After more than hour of hailing, the risk of avalanches was too big for us.


We decided to escape, as usual. The will to live was once again stronger than our ambitions. What is correct of course, yes, but you know ... it is difficult. Some of the old belay stations have been in quite good shape, roughly 40 meters from each other. The only issue is down at the glacier where the really huge crevasse crosses your path so that you have to either go around with the risk of avalanche, ice fall and fall of the stones or you take a ledge on the left (in direction down) and rappel it down (recommended). 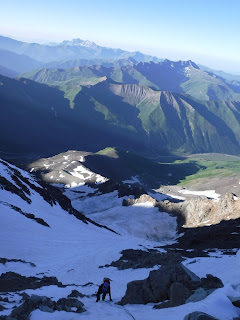 We got at the glacier plateau at late afternoon and I wanted to descend down to the base camp and have a nice dinner and drink a plum vodka and just have a nice time there. Well, the truth is that we rose up again to the c1 of the Shkhara-south. 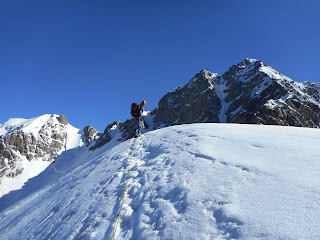 The next day was a perfect day even the weather forecast told something slightly different, as always. We reached the summit of the Shkhara-south by the non-official route over the glacier recommended to us by some nice guys from Ukraine. The descent was quite long 3a route with few dangerous parts because of very damaged rock. 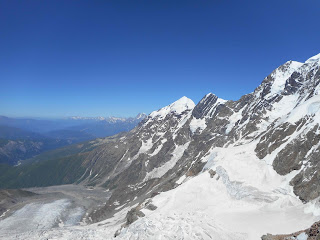 We spent one more day in c1 of Shkhara-south thinking of what we could do next days of non-stable weather (the pictures shows only the nice part of the trip). We knew about this 5a route (at the picture bellow) from very old guide book, the only book available for this mountain range published in 70's. We spent hours of staring at that face discussing it. It wasn't really clear and I wasn't really convinced that we should try that. But after hours and hours of studying that, one just somehow gets use to it, knows every single part of it and finally becomes reconciled with that.

We descended down to the base camp, left our big rucksacks there and went to visit our friend from Ukraine, namely Mstislav Gorbenko, in 90's one of very best climbers in the world. He gave us some food which we appreciated very much. There was one group of his expedition at exactly that 5a route we were thinking of. They got somehow stuck at 100 meters bellow the summit when the night was approaching. Mstislav was a little bit nervous about them and we as well. We could be in the same troubles at this route. When we left his tent, it was already dark. We saw three small lights in the wall. The storm was approaching. 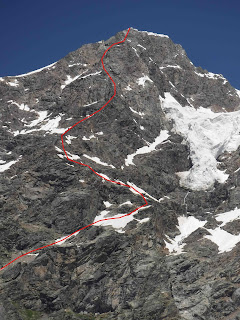 Even though we knew about the complication the Ukraine group had at Shkhara-south, we decided to go. We moved to the c1 by the route we already knew quite well. The day and half of a good weather in front of us. No storms, no hailing, no snowing or raining. We had the best conditions to try that and we knew the face so well that we could paint that. I wasn't too much worried that we would loose the route as it happened to Ukraine guys. 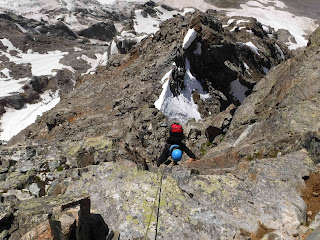 Long and broad snowy culoir was for free. Then few not that difficult steps. Ok with the 10 kg on my back it was a little tough but nothing technical. Then again some walking with few climbing steps. Everything went very smoothly until the 40 metrs long pitch at level of V. Mrqa spent quite some time to figure out the easiest solution of this obstacle. But he managed to find it and I followed him with the pulse at least 200. 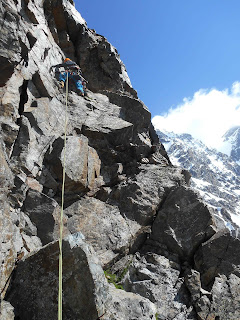 There were other climbing parts but this was really the key point. When we reached the summit in 8 hours and 45 mins from the beginning of the culoir I was fucking proud of myself. This was fast. This proved me that 40 hours at Verte wasn't really our fault. 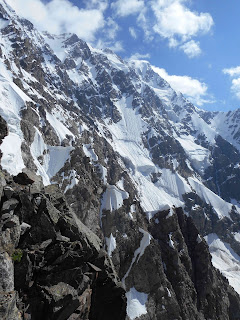 We managed to reach the c1 in the same day and descent to Ushghuli on the next day. Of course we passed by Mstislav at his base camp to meet him again, tell him about our success and eat everything what he place in front of us. I have never had so tasty sardines with a Georgian bread. Well, maybe I have never had better meal before. And this is why we do that. Every feeling, every taste, fear, thought, disappointment, sadness, happiness, pain, ..., everything is much stronger in the Mountains. Is it really a life in the cites where everything is so numb, so safe, so normal? With suffering in the mountains comes great reward: real being. 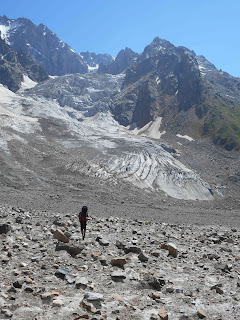 Well there is a lot to say about Georgia, Mestia and Tbilisi. People are great. Food is amazing. We asked one girl in the subway for a direction. She showed us and wanted to help me with my rucksack. What? Is that really common in Georgia that a girl helps a guy to carry something?

When we passed Tbilisi before we met Guansa a Georgian friend of Mrqa's girlfriend. We had an opportunity to stay with her company for a one day. Here are some parts of a long discussion we had:

Guansa: "How often do you see your sister?"
Me: "Once per year."
Guansa: "And parents?"
Me: "Maybe four times a year."
Guansa: "But why?"
Me: "Because I am living far away from them."
Guansa: "And why you don't live closer?"
Me: "Because nor me neither my girlfriend could earn so much money there."
Guansa: "But why do you need so much money if you can not be with you family?"
Me: "Look, this is quite common in the western countries. You have to earn some money first if you want to build a family. Most of the people is living like this. And most probably, this comes also to Georgia in a few years."
Guansa: "And this is your lifestyle? I don't like your lifestyle. I don't want this lifestyle here."
...
Guansa: "What would you do if you have a lot of money?"
Me: "It depends. Most probably to build a house and invest the rest to make even more money from that."
Guansa: "I would build a big house for my whole family. And more money I would have the bigger the house would be."

Than she paid a dinner for us in the restaurant in the middle of Tbilisi. We wanted to invite her. But she strongly refused because we are the guests. Georgian people are very proud. I think it had to cost more than 10% of her salary.

We have a lot to learn from these people. And we shouldn't destroy their culture with our picture of life. This country is maybe not that developed as our but its inhabitants (at least some of them) are more developed than we are.

So this is my picture of Georgia. No bad experiences. Go and see it by yourself.