The plan was to reach Ebenfluh (Aebeni Flue) but it wasn't realized. The reason was the weather and new snow that we even didn't tried. I am not going to bother somebody who is just interested in pictures and information to talk about that.  I would just refer to the first citation from Messner which can found be here: (not yet). 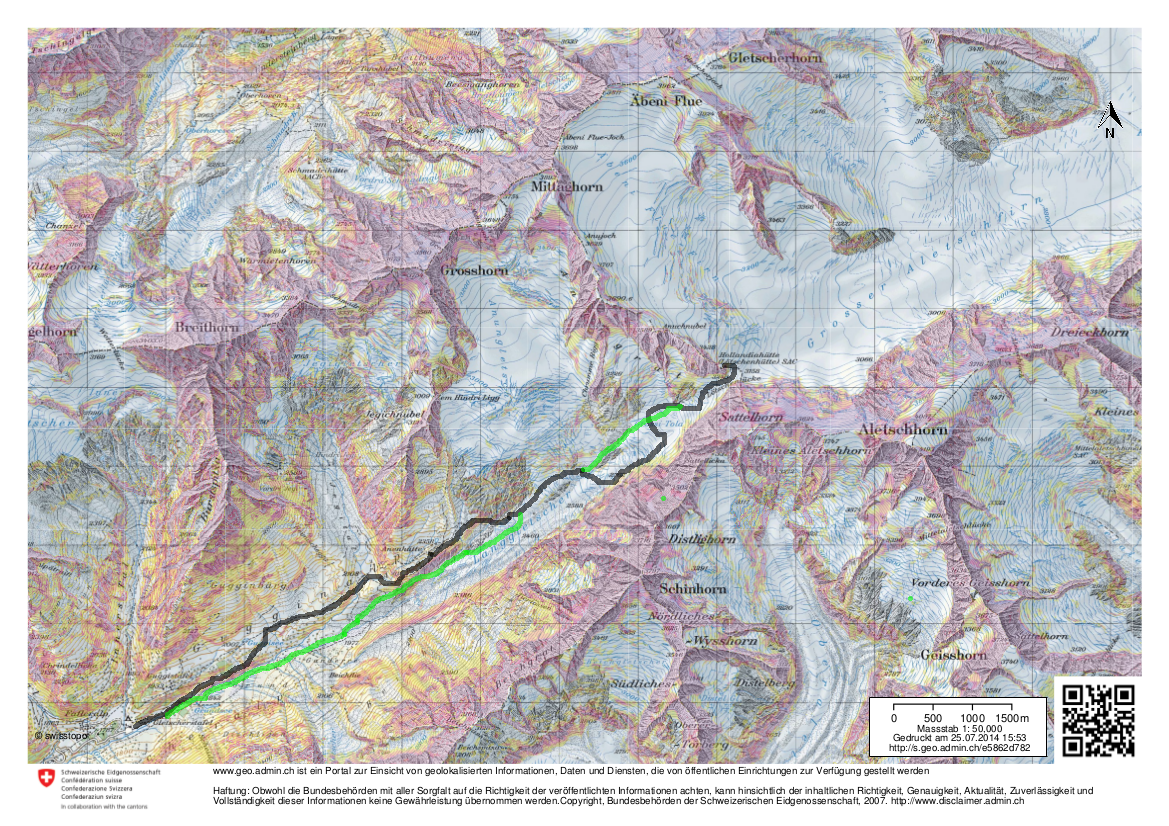 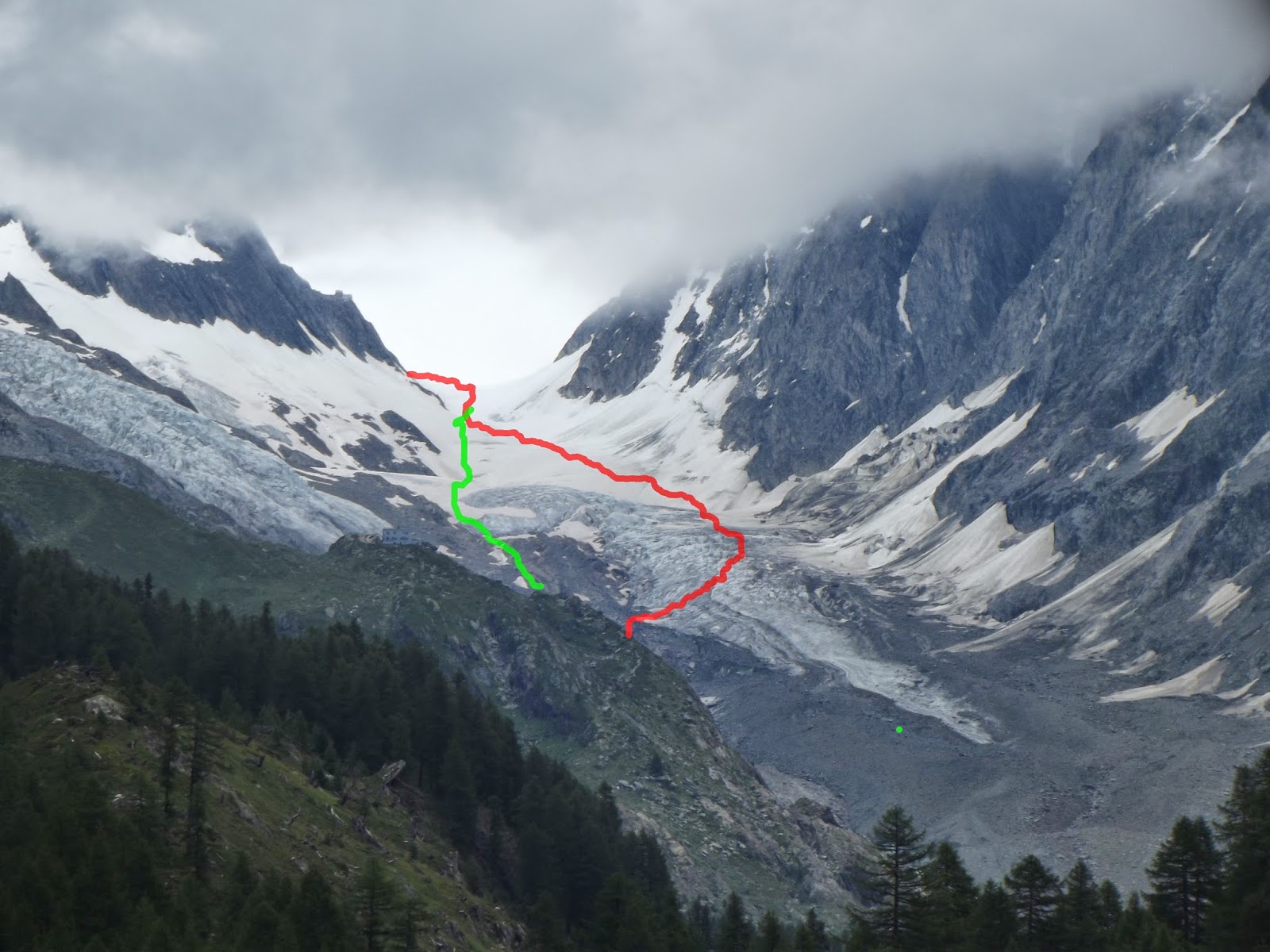 IMPORTANT WARNING:
One can see in the pictures above detailed study how went up first day to Hollandia huete (black,red) and how went second day down (green). Let me say that black-red one is wrong path and I really cannot recommend anybody to follow this track. 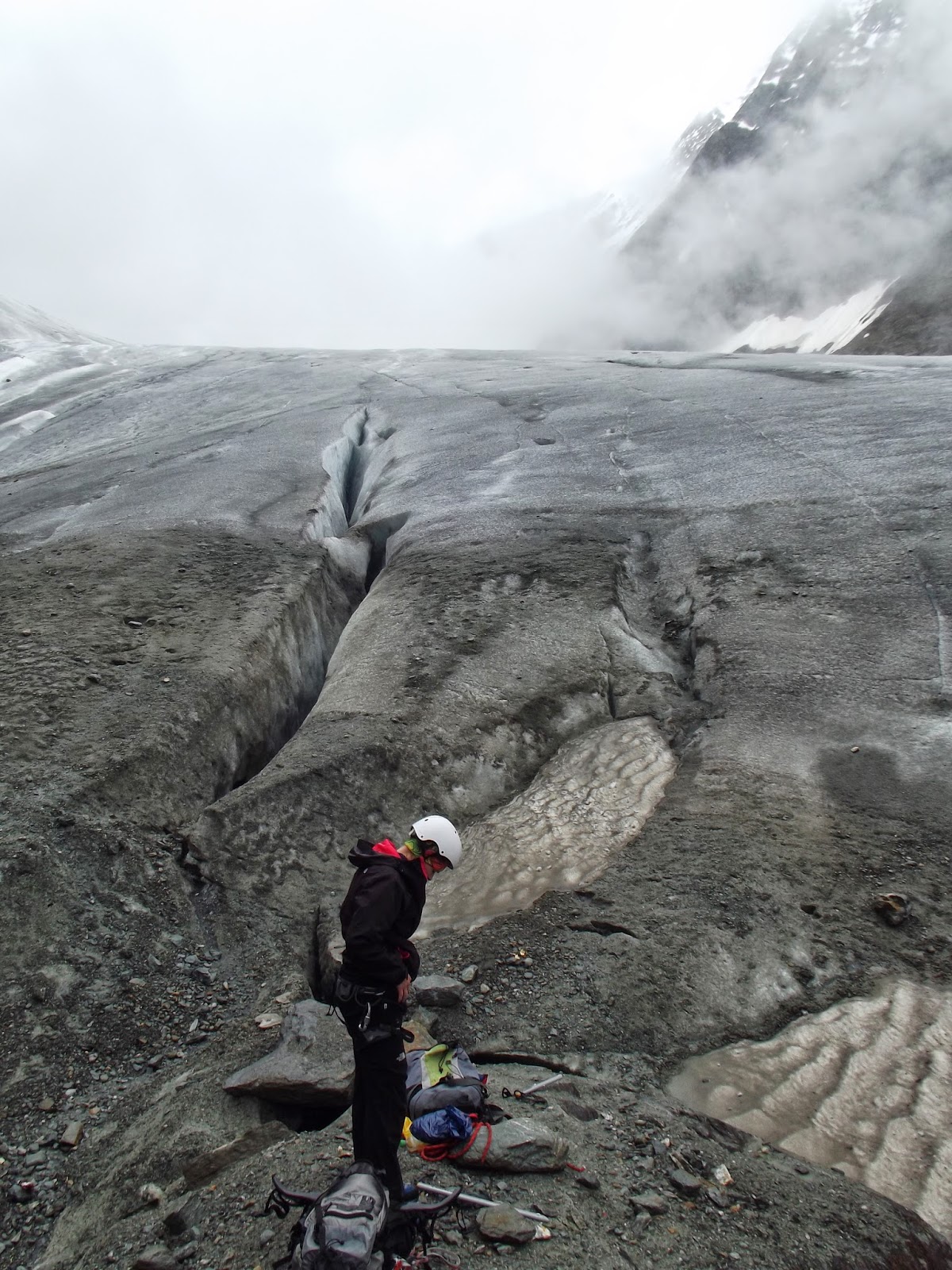 The path from Fafleralp to glacier is not that straightforward. I think the best way is just keep at the valley on left side of the river as long as possible. One can also go over Annahuete but that seems to be little bit longer.

We reached the glacier at three p.m. what was still quite fine taking into account that we wanted to reach Hollandiahuete till six for dinner. I was just little bit surprised that there are no steps or clear path from other mountaineers. It looked like nobody went this path last days. First part was quite clear, there wasn't  any better way to go.  But then we got to the point where we had to decide where to go and any option looked very nice. I thought we should follow that huge glacier rather then follow left side of the valley and that was bad decision. 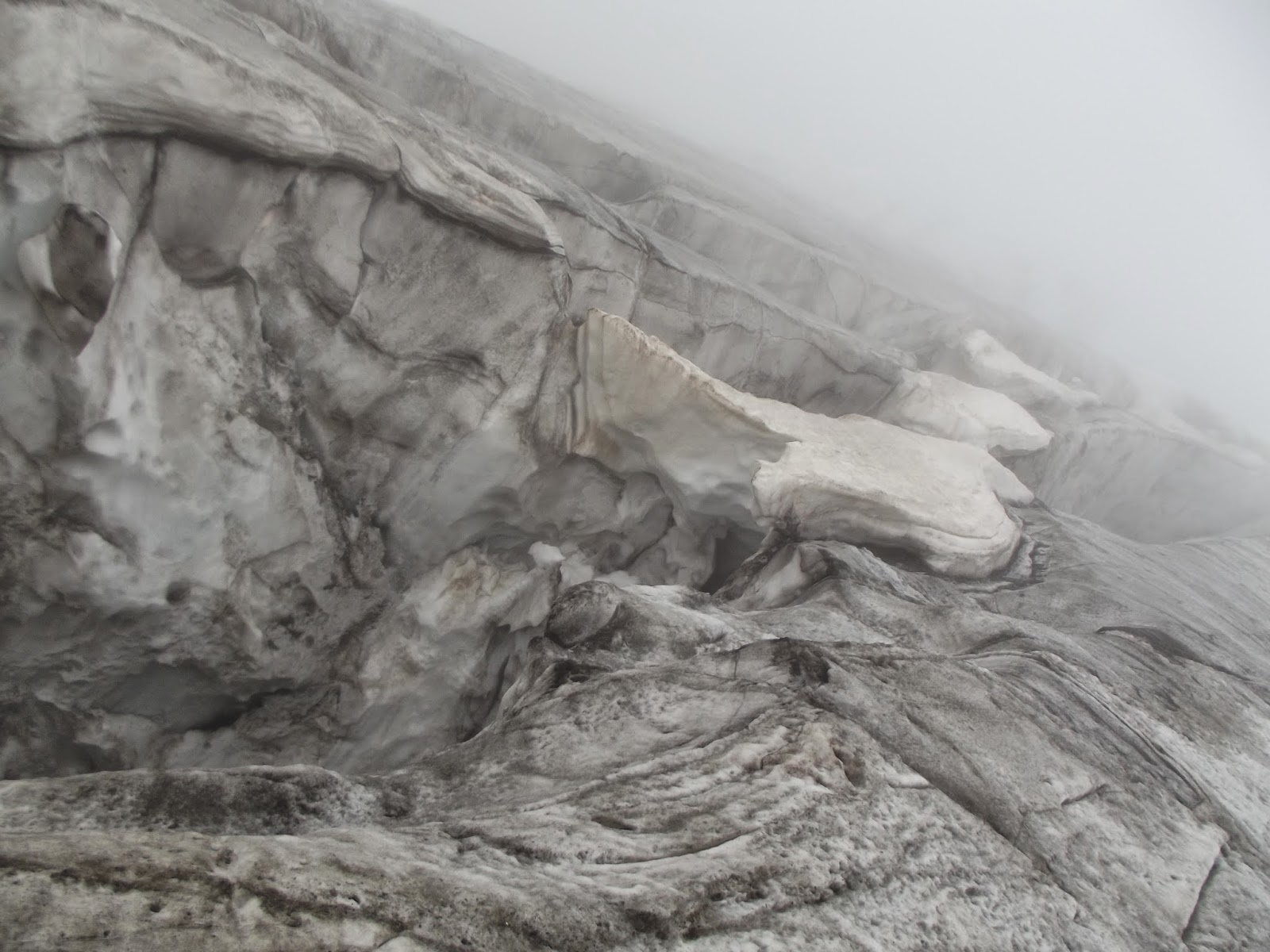 Also weather turned to be bad, not so much rain but misty so I had to use just my intuition where to go. There was a lot of Crevasses around and I said myself that I would really not like to spent this night somewhere in the bottom of that cracks. Fortunately they were not covered by firn snow so we could just dodge them quite safely. We almost managed to get over this damn area when some layer of snow started. 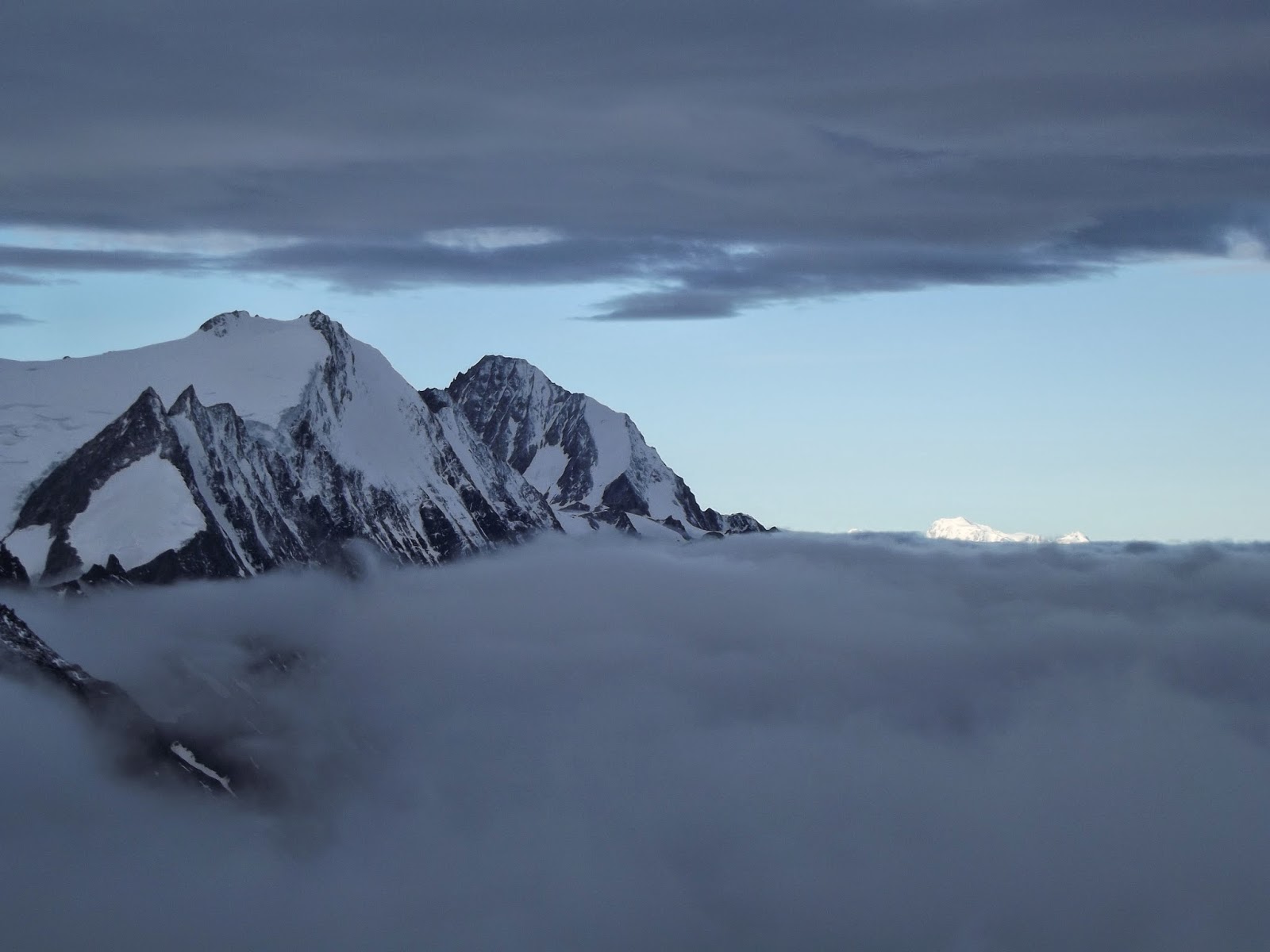 This snow on glacier is enemy of every mountaineer because one can not see what is bellow then. It was maybe few hundred metres from Grossi Tolla when the snow caved in under my foots. So I want to say, be really careful when you cross the glacier in the track which is commonly not used. 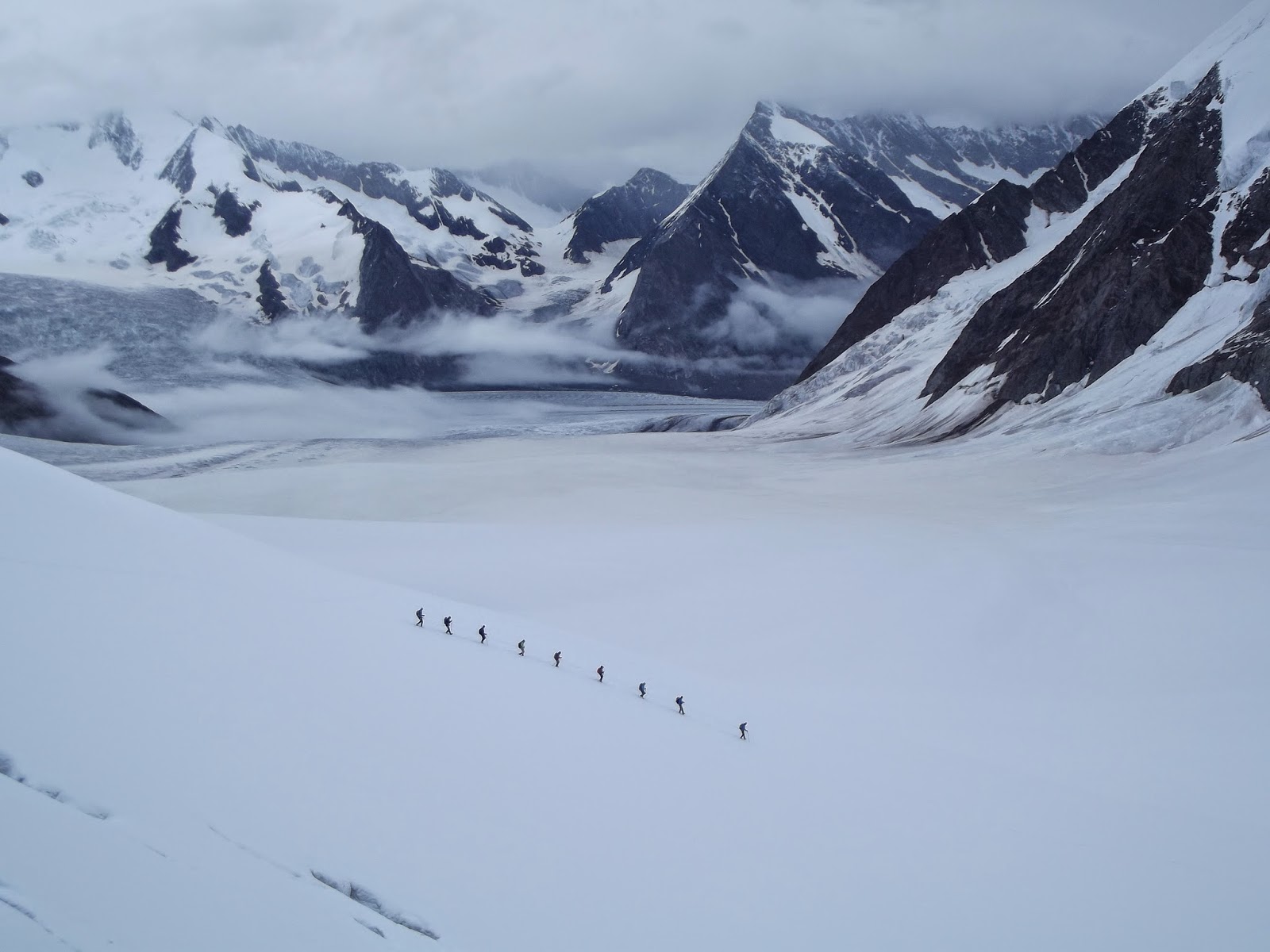 Second enemy is this mist. You don't know where you are going (that reminds me that I have to buy gps). We got to the point where we started to walk down in all directions. I thought myself "What the hell is that?" how can we go down in the middle of the valley which is going up. There is actually small hill in the middle of the valley which is not that big that one could see it on the map but sufficiently big to be confused in the mist. We just continued along the left side of the valley following the contour till we ended up before one rock falling down to the valley. It had so clear shape that I could recognize that on the map. After few steps in the right direction we found some trash and I knew that we are on the right track. What followed was just long hike up to the Hollandiahuete. 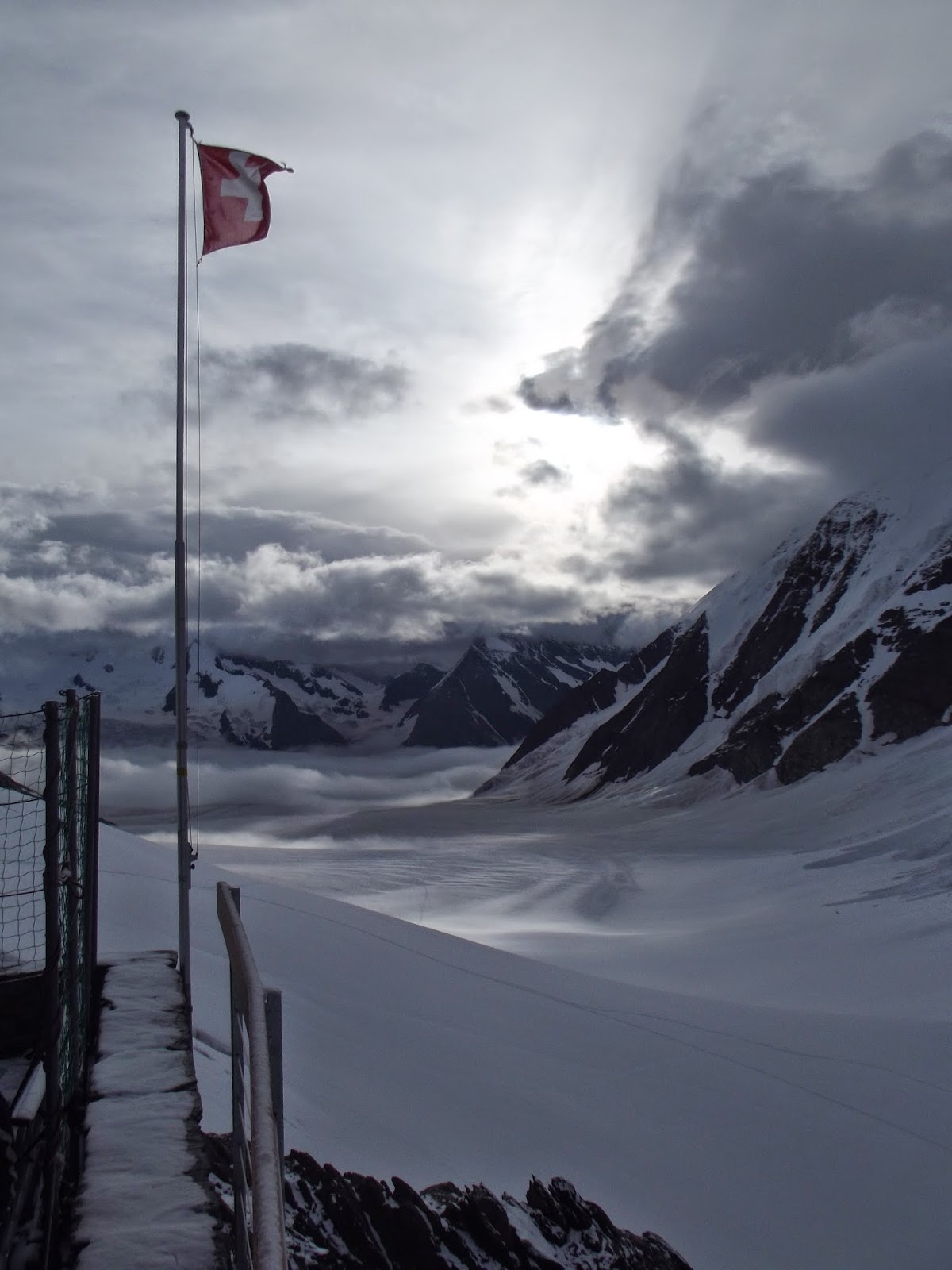 Second day we spoke to two guides and both said that they do not expect that anybody could reach Ebenfluh top today because of soft new snow. And we didn't want to stay at the Hollandiahuete as it is quite expensive (but it is understandable given the position) and we would not be sure anyway that we could reach the top next day. It was difficult decision but we had to give up. 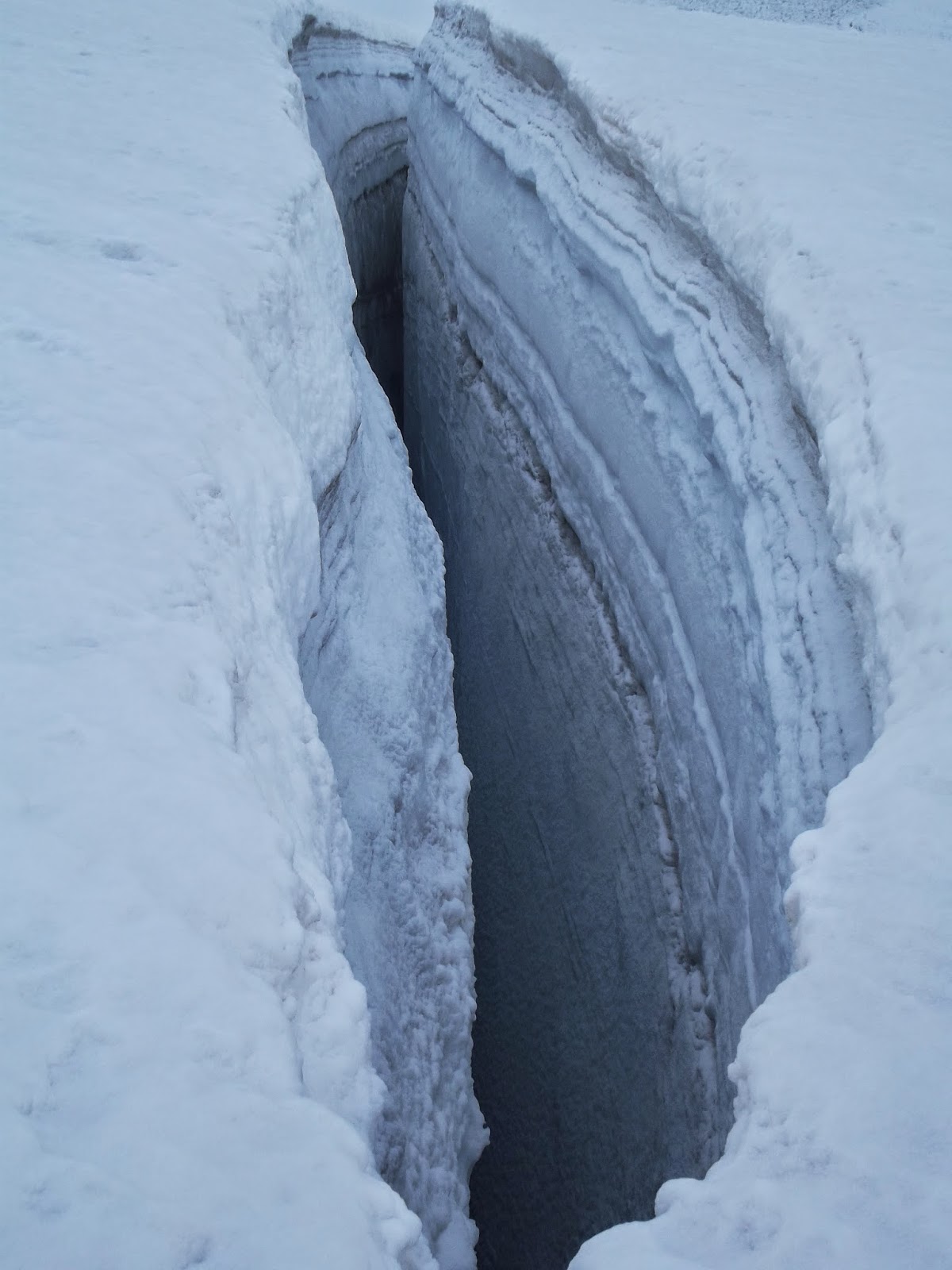 Way down was much easier as we just followed the footsteps from two groups guided by that guides. 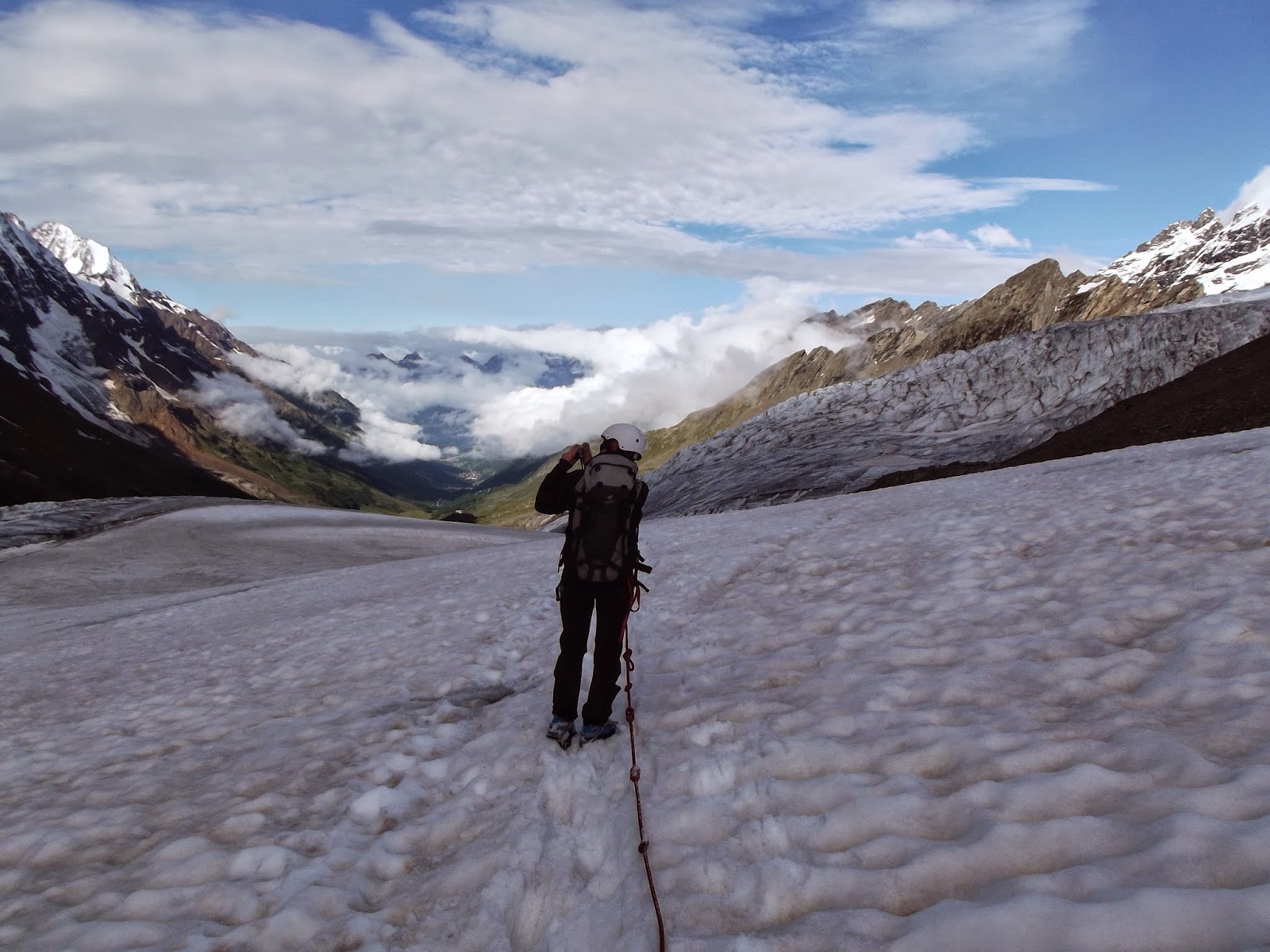 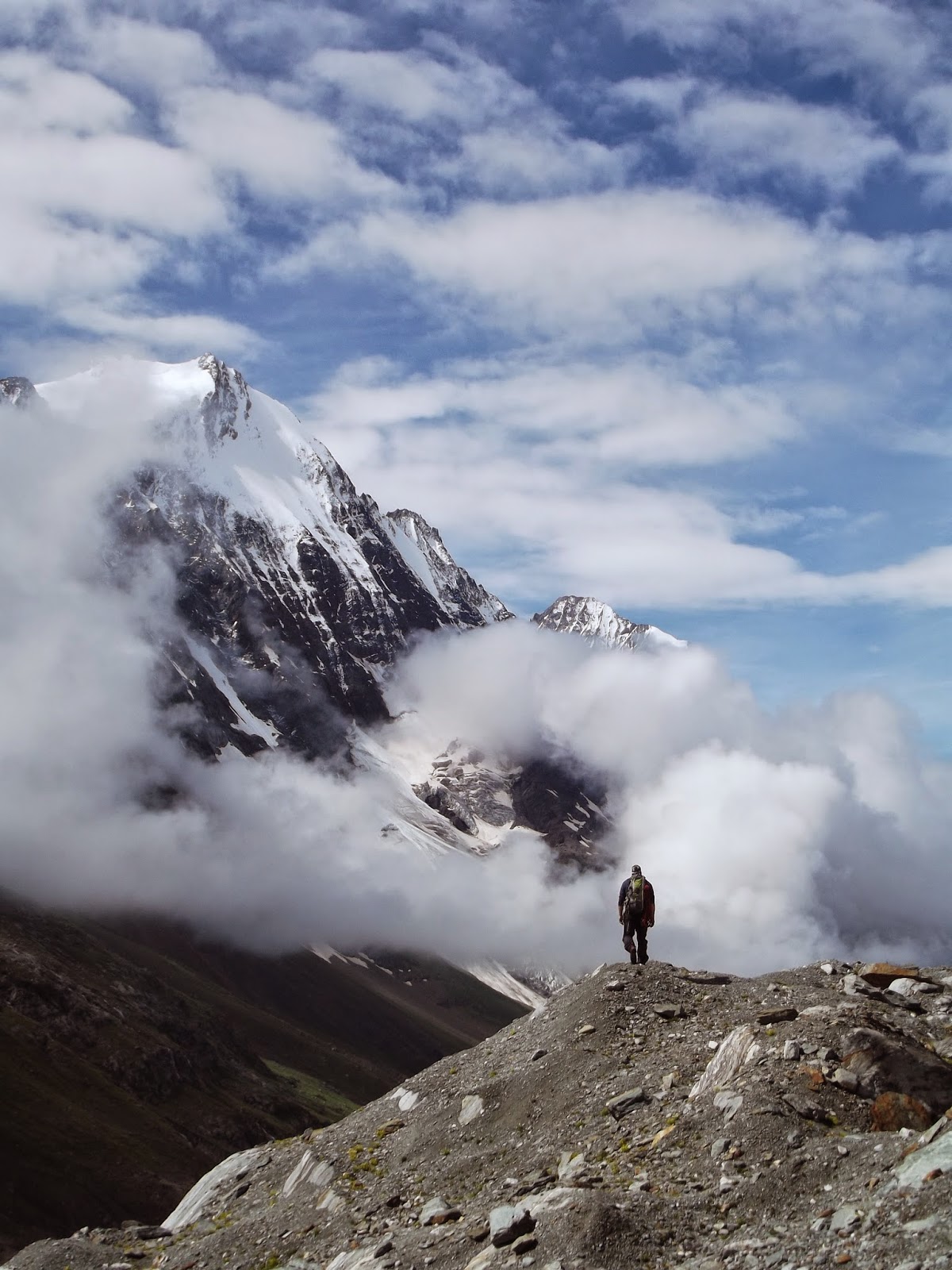 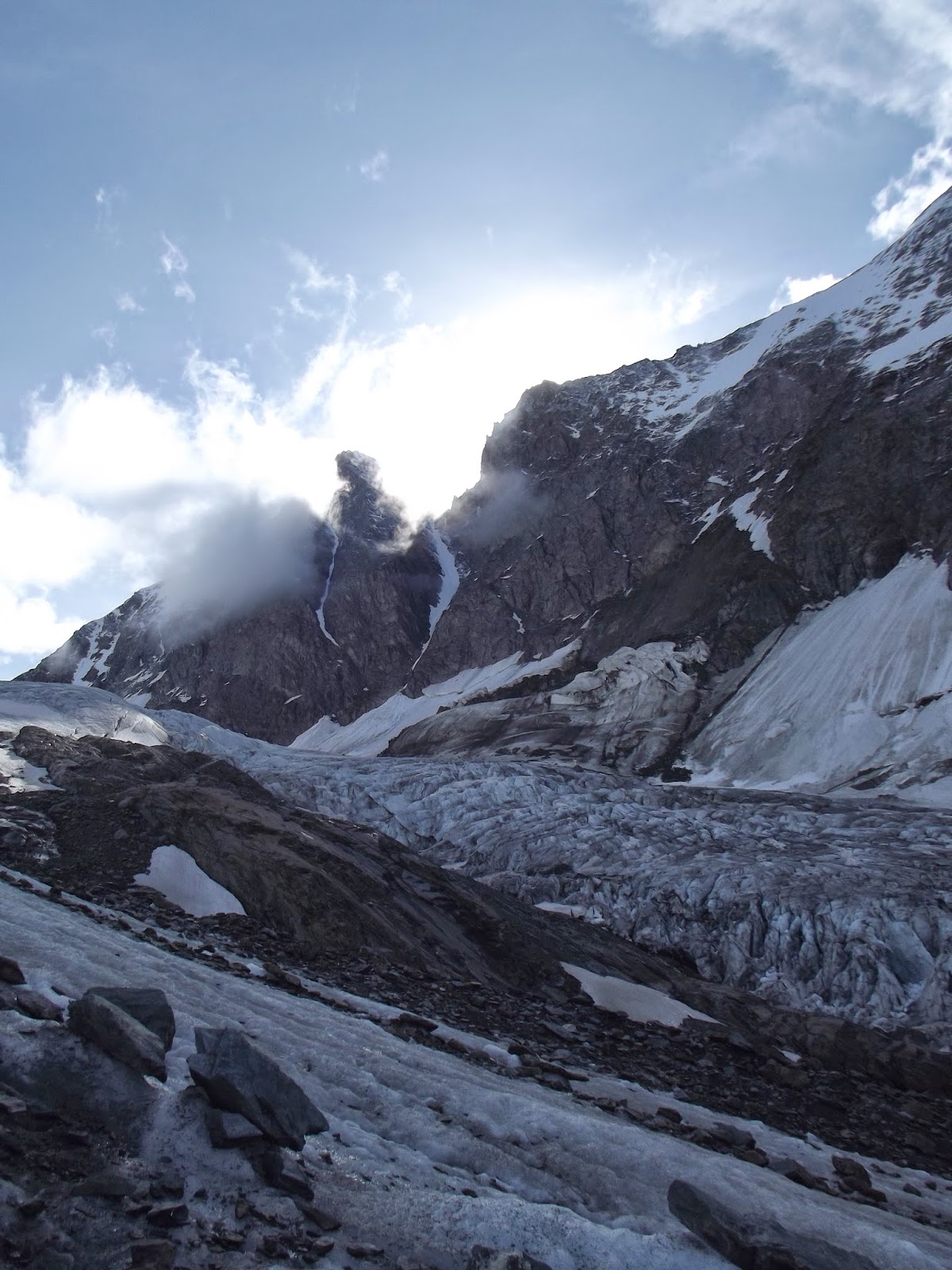 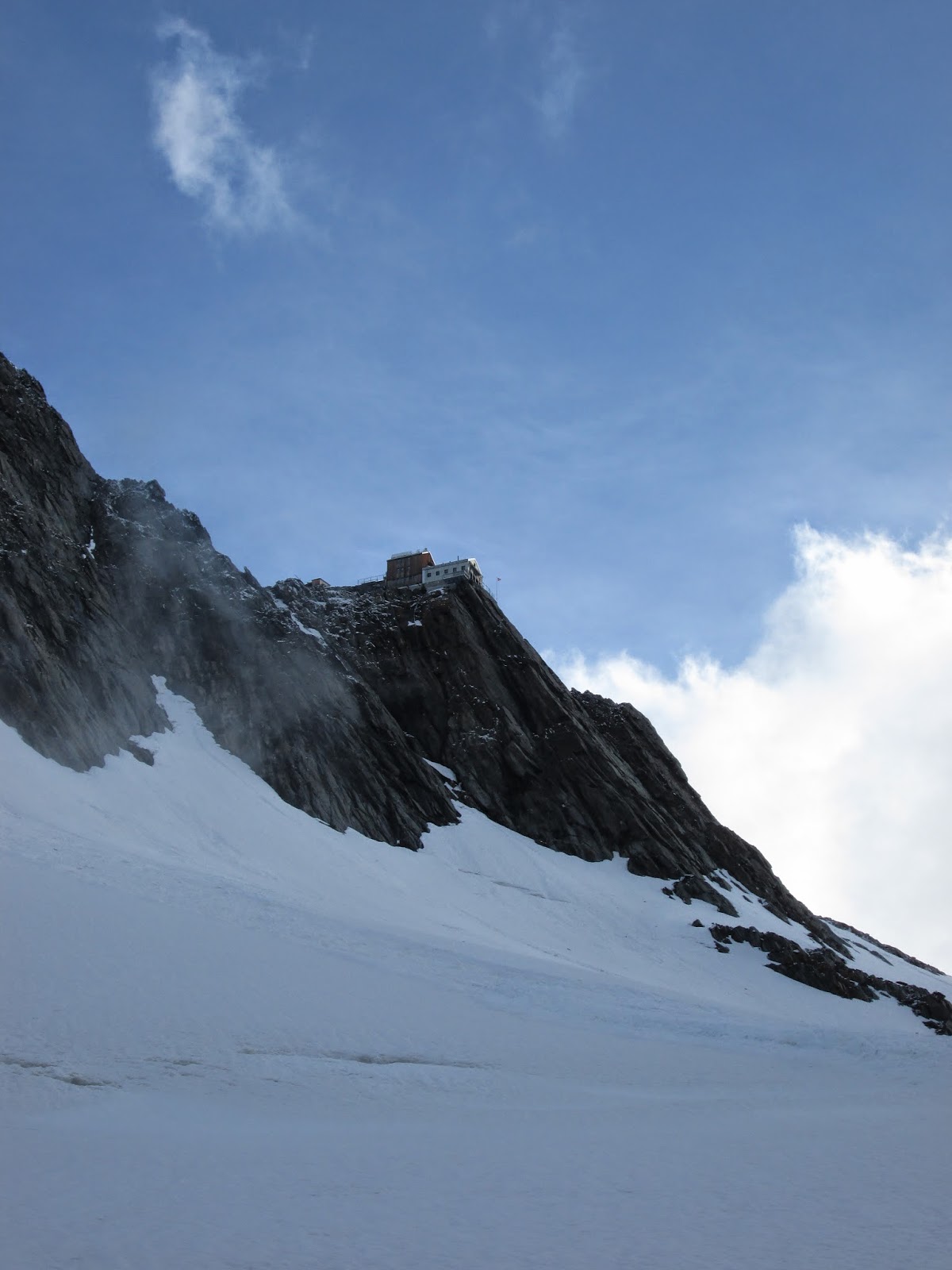 To conclude it is amazing place that is really worth to visit. Just keep in mind that it is maybe one of the wildest place in the Alps and can be tough in bad weather. I made a mistakes I failed and  I have learned from that. 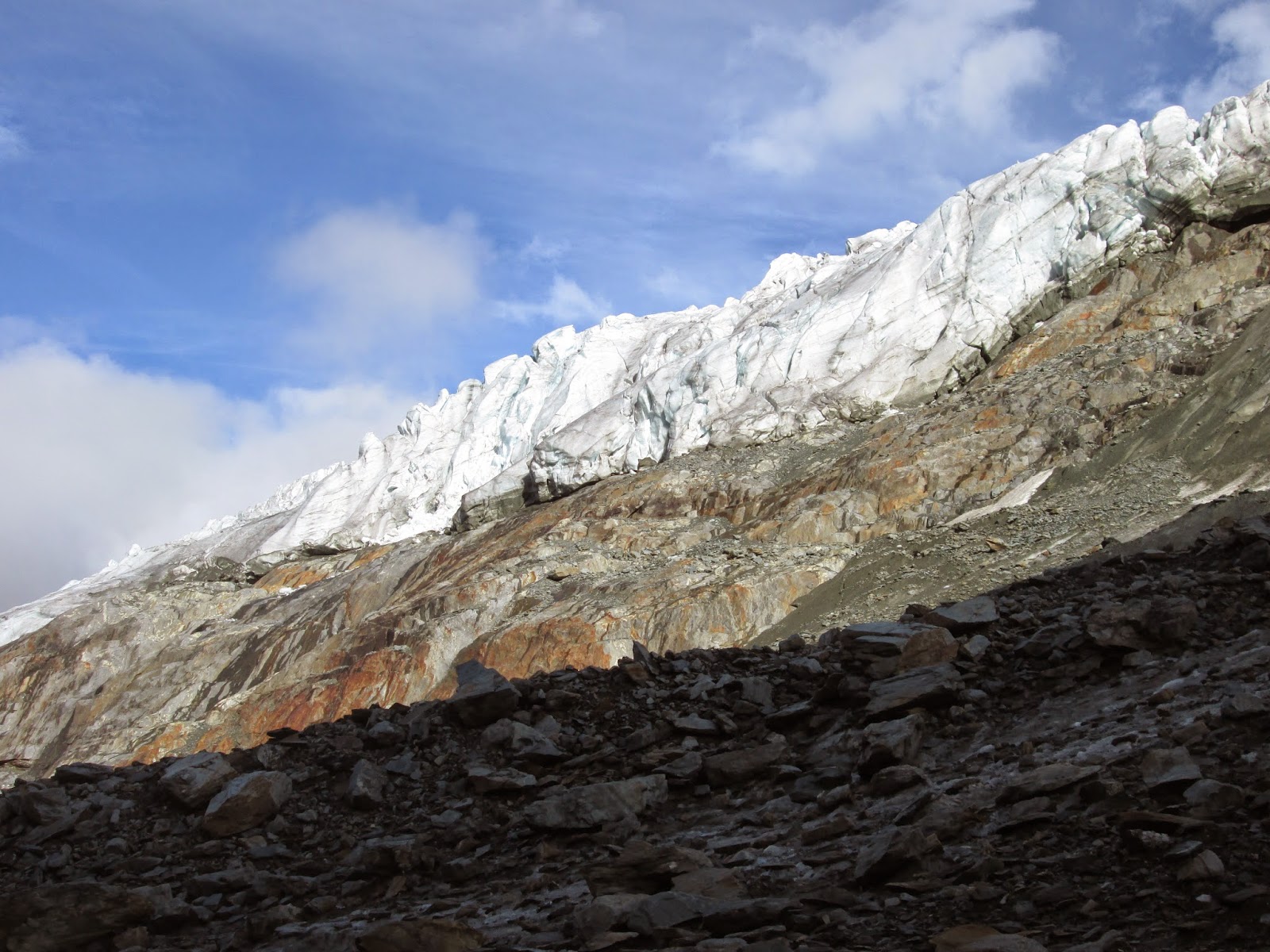