the best information can be found here:  sonnenspitze

Matterhorn of Ehrwald. It has still far from real Matterhorn, but its shape may certainly attract many climbers and hikers. There are two routes over south ridge, one is via-ferrata (good escape plan in case of bad weather) and the second is climbing route following the ridge very precisely. Whenever you don't know, where the route is exactly leading, go closer the ridge.

Unfortunately (or fortunately?), I forgot my camera hence the picture provided here is stolen from somewhere else. I regret it a little bit, since I could make really astonishing pictures of dramatic clouds and my beautiful wife hanging by crag in vertical sections. On the other hand, there is too much pictures, videos and all kind of stuff presenting how awesome people are (and I contributed already a lot as well), so why not to take it little bit more simpler and fluent with no cameras. It gives an opportunity to stay for a while and rather remember the moment or a view as strongly, as one is capable to do so. I really can realize that my remembers are stronger from this outing. And my wife is not talking about anything else, than Sonnenspitze. 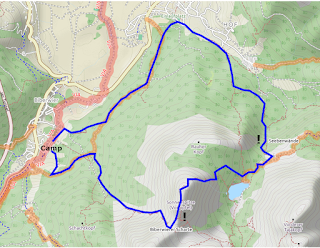 I like to the round trips not using the same way for descent. The trip has somehow larger value for me, if one can do full traverse of the mountain. The round has to make sense, although I can not tell any specific rules for that. My path on the map above could look a bit better, namely during descent, where we misleadingly used the route more on the east. There was one simple reason for that. The mountain hut over there serves incredibly tasty sweet dumplings with vanilla sauce. And once you eat such a good thing, you definitely don't want to climb up the hill back to the correct route. You simply rather descent the via ferrata marked as the most difficult (E), see the second exclamation mark in the map. This costed us 1 hour of time. On the other hand, it was quite an adventure.

At 7 pm, we arrived back to our friends to the camp. Well, in reality some of the friends were still hanging somewhere in the walls around Ehrwald, but this is different story.