The difficulty is only roughly estimated. I found only one outing documented here.  At that outing, the required is set to 3b. Me personally, I would rise it a bit to 4a (ad-). But can well be, that we haven't found the most optimal route on the ridge. The route shall be however rated tougher due to the loose rock. 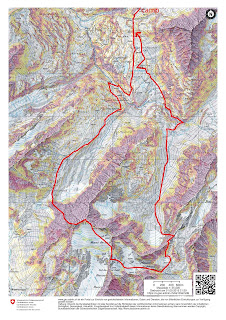 It is rather long tour from Mauvoisin and the such a tour directly from there is highly demanding. We intended anyway to reach also Ruinette, thus the decision was to use a camp at very convenient and strategical place, namely bellow the glacier du Brenay. 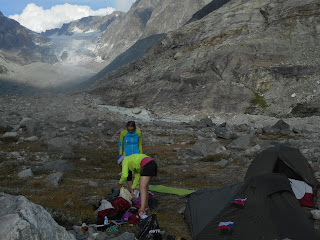 The Monday started with clear sky and Martina, Dada and me enjoyed the tour to the pass Fenetre de Durand. Martina felt not in good shape a and returned back into BC. We started to climb first crags not roped. But soon, the difficulty of the climbed reached the level, that we decided to rope up. 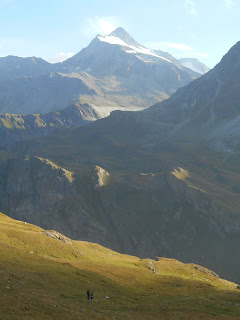 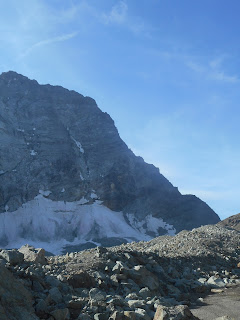 On the left picture: Ruinette, on the right picutre: the ridge we intended to climb.

The ridge is pure. Pure in sense that there is nothing left from previous climbs. One needs to use purely his own belay. At the very low parts, we lost the most optimal route, and got to the wall on the right. This was however not a big issue, just moving up was little bit tougher. Real issues occurred at the middle of the ridge, where the rock becomes very loose. Holds and steps which one can not believe and reliability of own belay in this rock is very fishy. 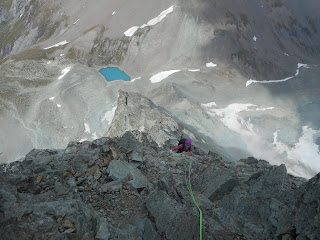 Complete end of the ridge is again very nice. It looks like 100 meters of vertical crag, but in the end, it is quite easy. The tour back to BC was already easy, but still physically demanding. As one can see in the map, it crosses two passes and one still gain few altitude meters. We almost descended down onto Italian side, but the forests looked really weird -  I didn't remember any forests around the lake on the Swiss side. I took me a while to realize, that we are descending on wrong side of the mountain. Fortunately, we were in good physical shape, and returned the BC before the dinner - great Pasta prepared by Simone, who came from Mauvoisin just an hour before us. The fog covered the whole area in the evening, so we, as well as Simeone, were lucky to arrive on time.