Mt. Ruan is relatively small mountain, only 3044 meters high, but can astonish by its wildness. There are small glaciers with steps and falling ice. Its traverse from east to west is something, what could be already considered as mountaineering act. One could think of running this mountain with trail shoes. Well, ... almost. It would maybe work until Petit Ruan in case that all the snow is already melted. Except of the glaciated areas, there is not so much danger, but one needs to pass through some technical steps where belaying is needed (III-IV UIAA), please see second to last picture. 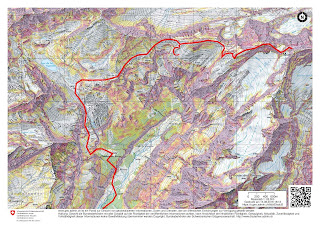 I decided for the ascent from the French side, with camp in the altitude of 2400 (see red 'C' on the map). It would certainly possible to do it in one day up and down. But why? This is pretty beautiful, calm place, so why to hurry? Ok, maybe it is just an excuse and I was so lazy. At some point, I sat down to the grass, started to read a book and I forgot about the summit. And it was quite cool, I have to say, much better than sweating, starving, suffering and all this kind of weird things I usually do. 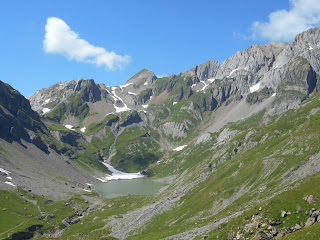 Astonishing waterfalls, blue-green lake and steep walls of Dents Blanches. I almost built my tent already there, but there was too many tourists to do so. After few more meters of altitude gain, really bad small hit my nose. I realized that there are excrements of capricorns all around. I was forced to go further, otherwise I would not have drinking water. Once one reach the pass, frontier with Switzerland, there is no grass any more. The excrements of capricons are however still there. 100 meters from the pass, on the slope on the right, I found a perfect place for camping, surrounded by rocks from three sides. And a view from there? Look at the picture below. 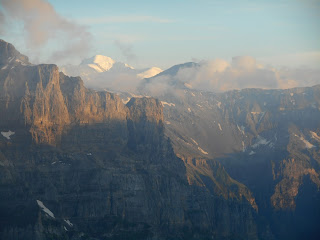 Next day morning, I woke up little bit earlier and run that hill up. Since it was night, I lost my path very quickly, which wasn't very good. I can really only recommend to follow the signs and return back when you loose them. This however wasn't the problem. The problems occurred when I started to climb that last step before summit, shown on the picture below. There was one point in that crag (maybe it was the last technical step) at level of IV. I had no rope for abseiling and I wouldn't afford to climb this down during descent. On the other side, I was already satisfied from where I was. In the steep face, alone and happy. The summit of Mt. Ruan wasn't really important for me. And I really don't care even now if I ever climb this mountain up to the summit. But I'll come again for its beauty. Most probably with my wife. 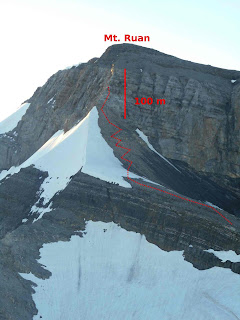 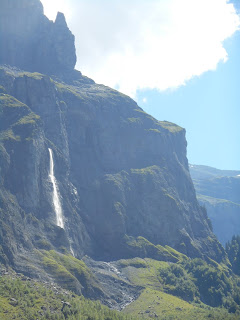 Remark: there are also Mt. Buet and La Cheval Blanc in this area. Believe me, they are ugly. Sorry mother nature for these words. It is also partly human fault, since there are electric cables leading exactly between these two mountains.