We walked along the piste heading to the ski resort Wurzeralm with the headlamps on our heads and skies on our rucksacks. Snow conditions, or rather grassy conditions, were very poor (grassy conditions great). The chalet Linzerhaus offers a great place to stay overnight and the cuisine is comparable with all of the Bavarian or Tyrolean restaurants: you order a small light dish but you get a huge portion of fat unhealthy meal which you must finish otherwise you will be killed and buried deep in the Tyrolean forests. At least it is tasteful. 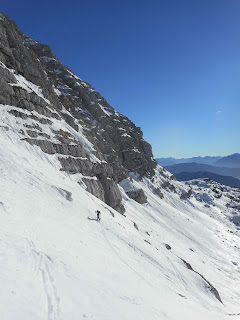 We followed the long piste (not yet in operation) up to the valley named Frauenkar and then we continued off-piste in the valley on its right side (left side on the picture above). Actually, the other side was correct choice. The avalanches can fall any time in that valley when the conditions are bad. But there wasn't enough snow those days.

One follows the valley until one reaches the pass between an unnamed sharp peak and the Warscheneck main summit. Then, the trail follows the slopes on the left looking from the pass. Rocky and technical part is visible already from here, see picture bellow. Fortunately, there is a fixed rope on that roughly 30 metres long climb and it can be passed almost without belaying. Above this part there is however nothing too difficult, it is just 30 minutes to the summit.


The summit was occupied by many people of several kind. I guess the ascent from the north side is way more easy. The summit offers a view of the Dachstein, and several lower mountain ranges. Despite a low altitude of this mountain, the feeling of high altitude is there, because all the surrounding mountains are lower. In a day of clear weather, I can promise you a similar impression as on the top of some 4000 peak. But you need to look down into the valley, like it is caught on the picture bellow. Nevertheless, try to be careful with these snowy edges. This mountain could very quickly prove you its dangerousness.