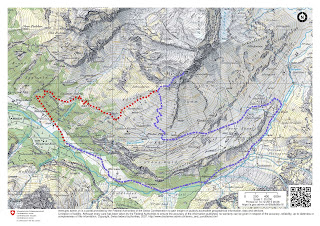 I left Freiburg at 5 am and arrived to Engelberg at 7 am. The surrounding forests and mountains were still under cover of darkness and nobody was around. At that point, I didn't try to search for the route by which I planned to ascent, namely the red route depicted in the map. The slopes seemed to me not worth to ascent, so I rather followed the valley, marked blue in the map. At some point, I passed the warning, that I am leaving controlled area and crossed the first avalanche that had fallen just few steps behind that warning. Even I was under very safe conditions in the morning, since the snow was really firm, I was very carefully checking every slope. I would never ever do this tour in worse conditions and I really do not recommend to enter that valley in winter if the conditions are not absolutely safe. But at this point, I am still novice in distinguishing good or bad conditions, and actually I am also a chicken. So don't take my recommendations too seriously, and better ask for actual situation some guide operating in this area. And if you are not stupid as me, do it before each tour.


At some point, I turned to the left to the steep slope and rose up heading to Wissberg. I had a nice view of the summit, already caught by the first sunlight. Then the conditions started to worsen, snow was melting and I was quite sure I can not use this route on my way back.

I thought it will be just a short quick trip and I'll be back for late lunch, but the opposite was true. It was slow and exhausting but still not less beautiful. There was nothing to worry about. No avalanches possible and weather should stay the same. Even though, I had a strange feeling. Something changed with me since the last outing. Maybe the winter conditions? Or my wife somewhere in my mind saying: "If  you do some dangerous things, you definitely don't get your dinner! ". And what what is worse than arriving from the trip starving, fridge is completely empty and no dinner until you prove you were safe. I am not sure. But the truth is, that from this moment on, I am not into crazy things anymore. I like to suffer and I continue with that, but no danger anymore even I love it.

I didn't get into troubles during this trip. It is quite safe ski tour. I got down safely by the red route depicted in the map. There are two places with the avalanche danger, but those avalanches had already fallen before I passed that points. The solitude is the thing that bothered me a bit.  As always. Not technical difficulties. But solitude is more challenging.

I like neither philosophy, nor thinking about the deep things. I like not to think at all. I fall in love with not thinking. This can happen to me only in the mountains. But I'll try for one time:

Most of the mountaineers, climbers and whoever else approaching the mountains, even tourist, ask themselves why they go to the mountains. There is plenty of clever answers. Enjoy to search for them guys, but you will never be sure that you found the right one, I swear. At least until you are searching.What I want to say, that there is no official reason for going to the mountains which has our god written somewhere in his personal book of the things that make sense. It actually doesn't make sense for anybody else than for you yourself. So go there and enjoy it as much as you can.

Well, I am not a philosopher. But I make nice pictures: 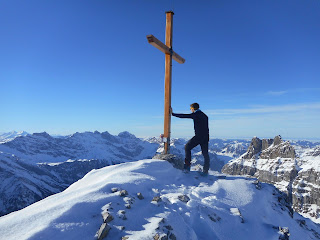