Everyone who call himself mountaineer should visit at least once per life Snowdonia. There are several reasons for that. First that these massifs are one of the oldest in the world. Just for imagination Alps grew up slowly about 300 mil. years ago, Sudets about 400 mil. years ago and Snowdonia about 470 mil. ago during Devonian together with Scandinavian mountains.  Second, also historical reason is that mountaineering as we know it nowadays was founded in Great Britain. Can well be that first ascents via more difficult routes were done there. Third reason why real Alpinists should visit area of Snowdon is that Edmund Hilary used this mountains for training before his ascent to Mt. Everest. There is actually very nice place called Pen Y Gwyrd where are pictures of him and many other heroes of mountaineering.


When we planned the tour we intentionally skipped Snowdon, the highest peak, as one can get there by train. Instead of that we chose two nice standalone peaks, namely Moel Siabod and Tryfan and one whole massive Carneddau with its highest peak  Carnedd Llewelyn. 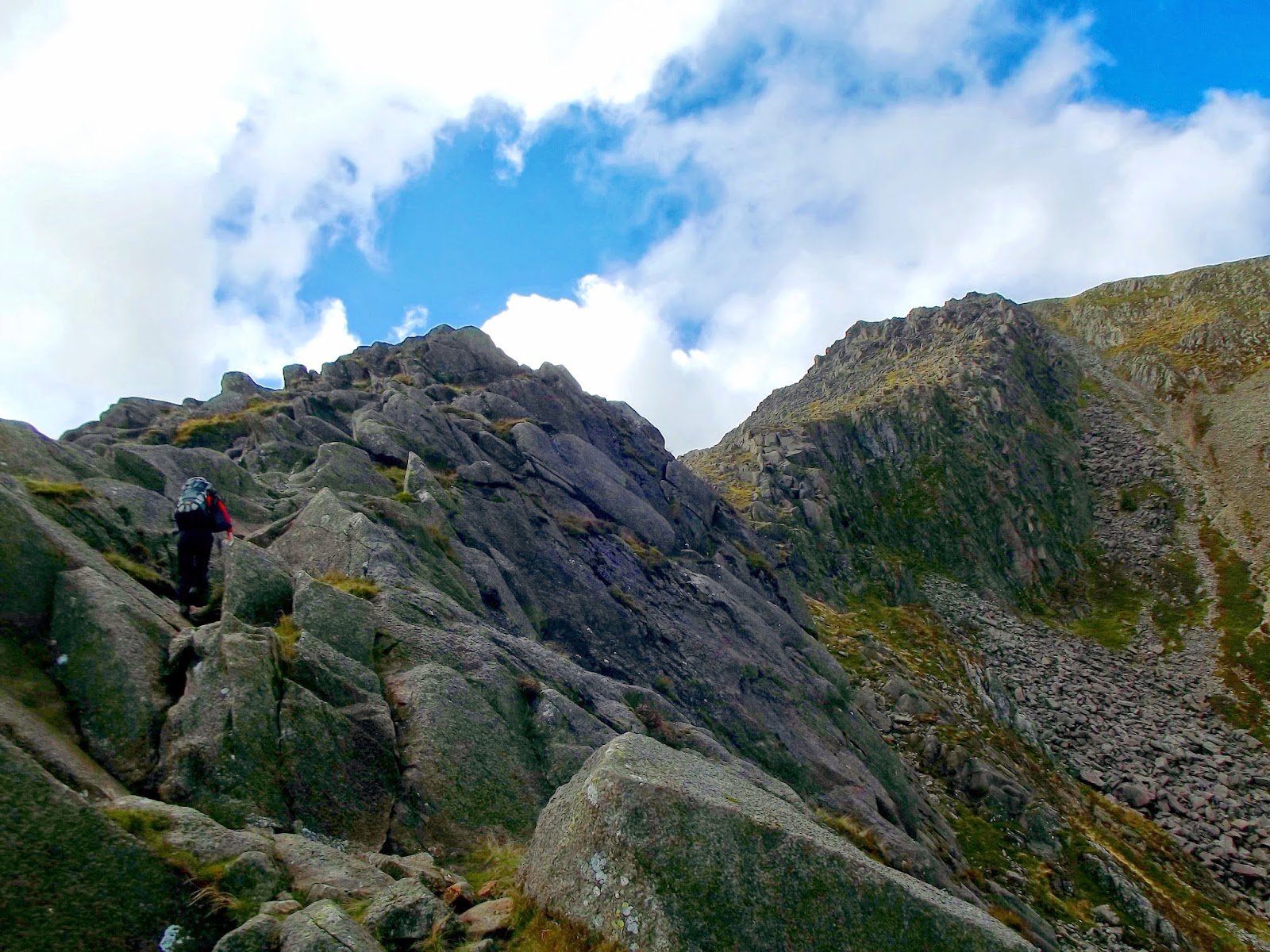 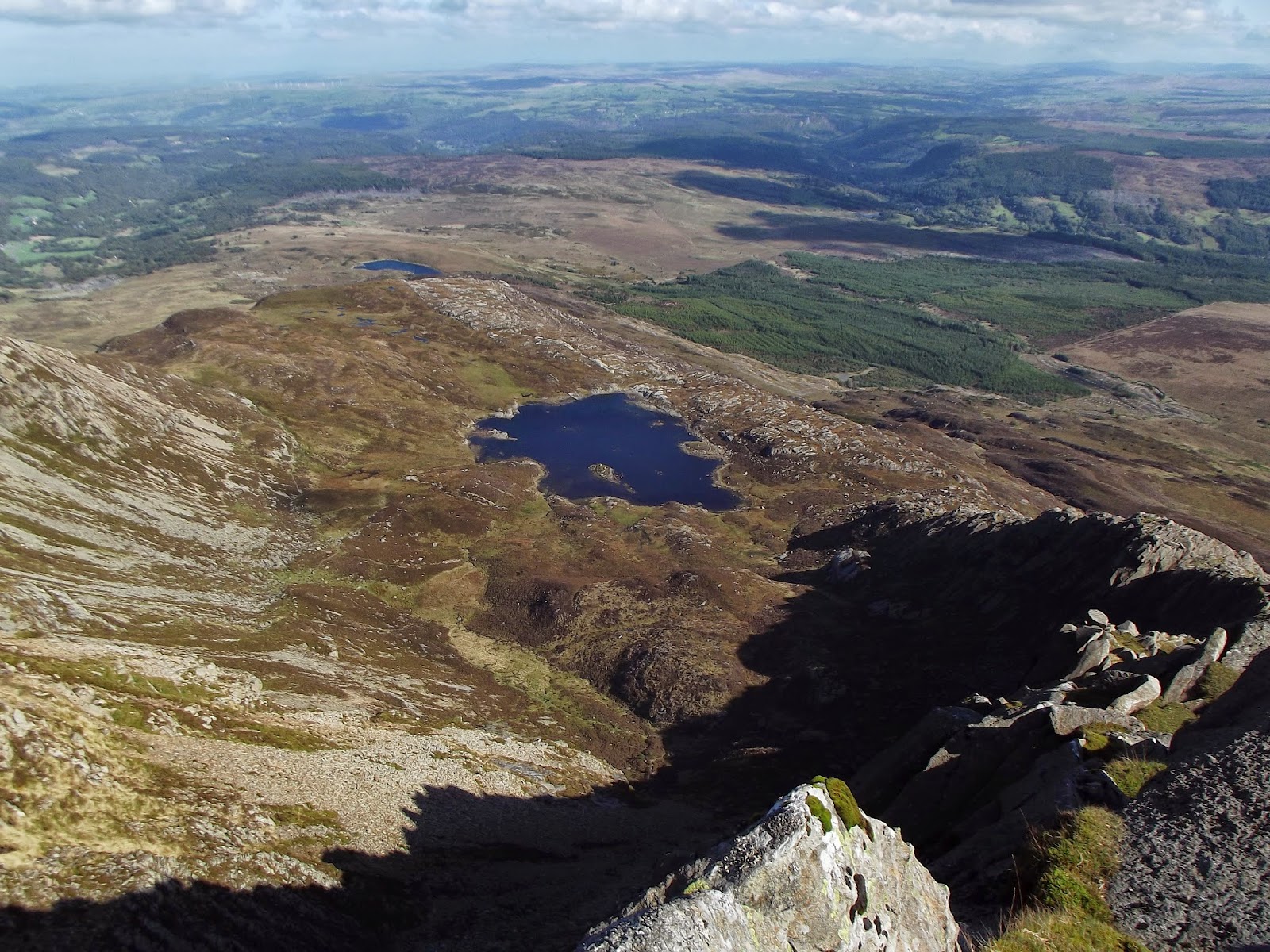 We started at Dolwyddelan train station and rose up to Moel Siabod. Weather looked not that promisingly and I was little bit afraid that story from Norway would repeat again. But surprisingly rainy clouds disappeared and we reached the summit with the sun burning our backs. Some older pair were already on the top and told us that this sunny weather is the absolutely common. But perhaps I missed "not" in that sentence as it is difficult for me to understand British accent.

When we fell asleep under one of the rocks (all positions are pointed in the google map above) the sky was still clear. Even when I woke up at early morning for a while I could count the stars in Pleiades. But in the morning we woke up totally wet with the mist all around us. 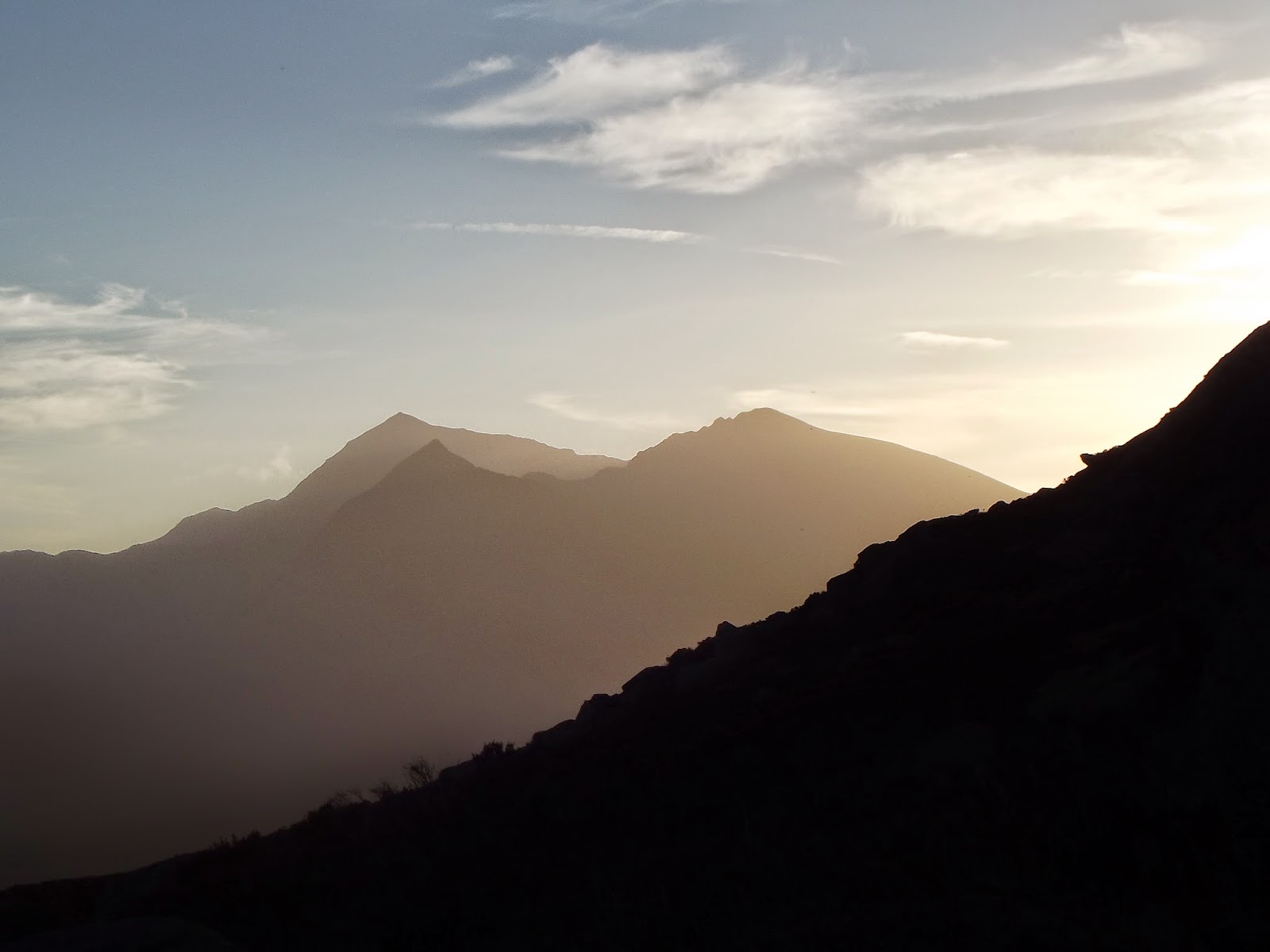 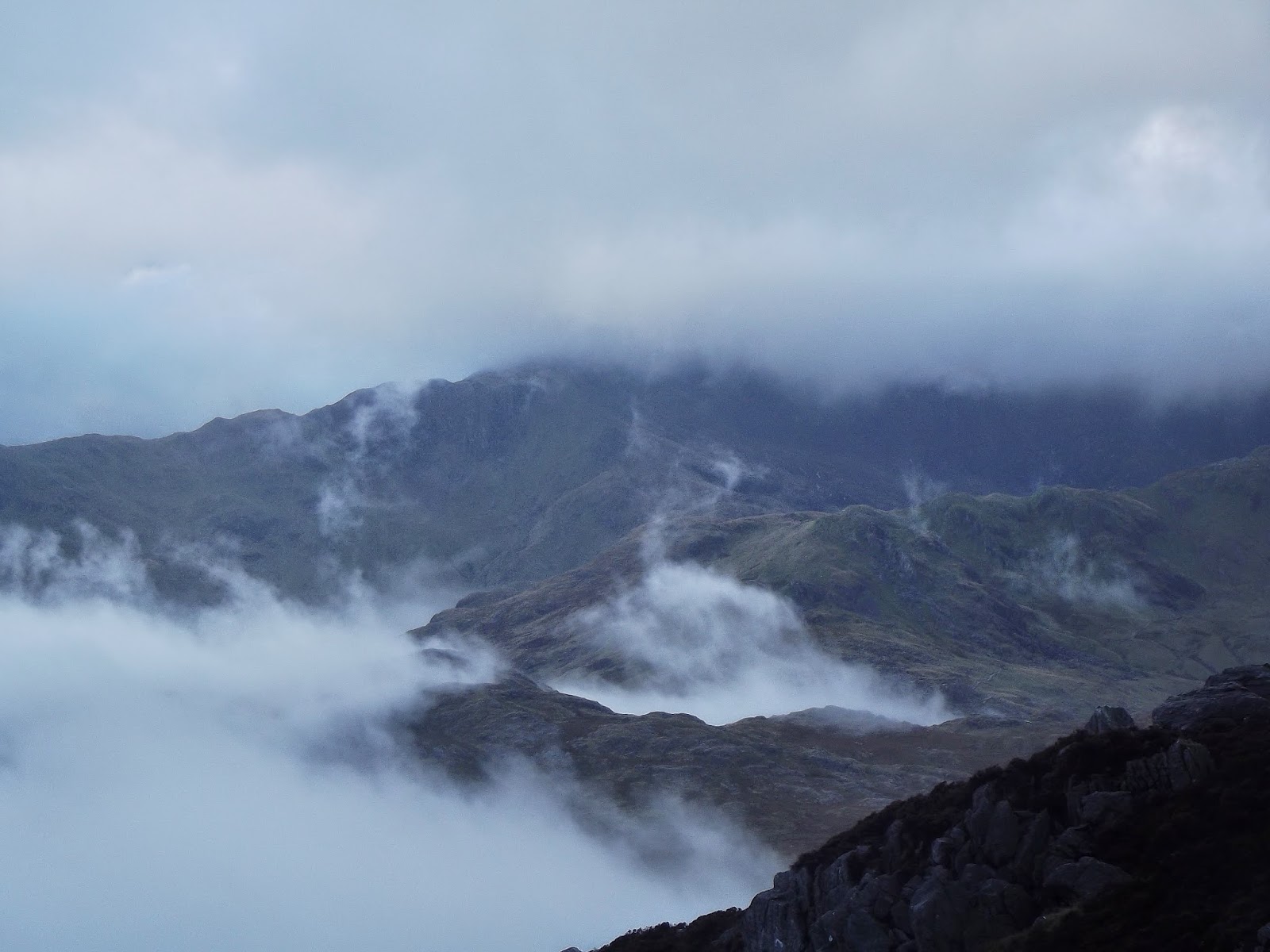 Massif of Snowdon in the evening left/ morning right

We reached Tryfan in the morning still in rainy weather. This peak is very funny because there is no clear path to the top. One has always choose his own route and in the rain and mist it can be tricky.


From Tryfan descent down to Llyn Owgen followed by Cappucino at two o'clock (in Italy was still one, it means before lunch, it mean allowed) and again ascent to the peaks of Carneddau summits.


If you plan similar trek be aware that it is difficult to find drinking water on top of Carneddau. But walking there is like walking through the landscape of fairy tale. At leas until you find yourself very thirsty. We were lucky that we found somebody, namely Charles form Stafford who had a cooker and therefore could boil the water.

We had to wake up quite early next day as we needed to catch the train. But as we are strong enough we made, of course on purpose, small hour circle in the mist coming back to Foel Grad bothy where we spent the night. Charles told us that we should go in opposite direction what we found as good idea. Descent was smooth 1000 meters falling down to sea level. Next time Lake District or Scotland. See you there. 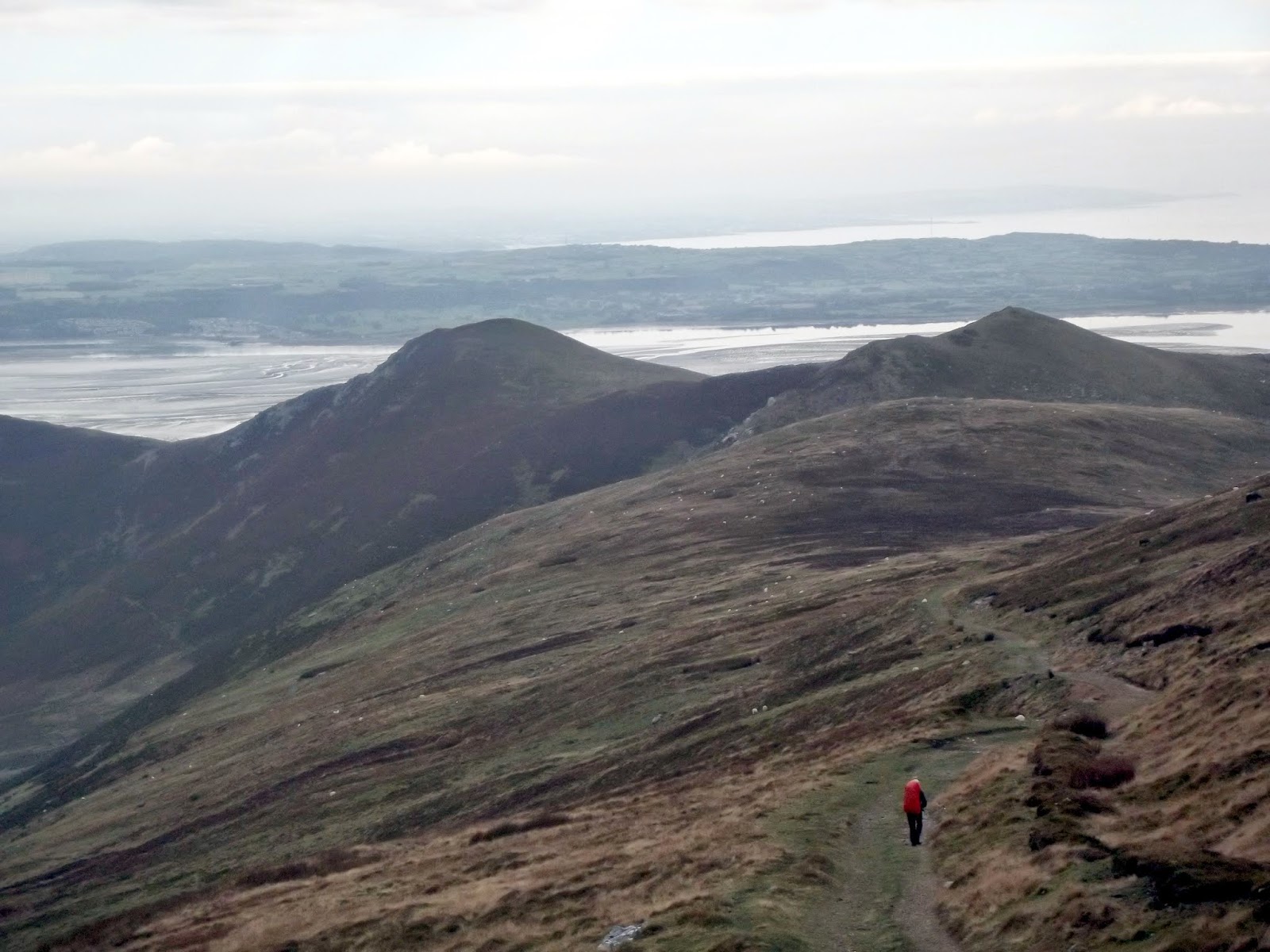 Email ThisBlogThis!Share to TwitterShare to FacebookShare to Pinterest
Labels: Skandinavie