This contribution is about climbing possibilities around Freiburg in the mountains called Schwarzwald. One can not expect any breathtaking stories about some adventure. You know usually nothing interesting happens during climbing.

I always choose some easy routes to climb what is caused by that fact that I am very bad climber. On the other hand I try to compensate difficulty by length. Fortunately Schwarzwald give us plenty of very long and very easy climbing routes. One can find some also here:

but not all of them. I will add some new climbing experience from Schwarzwald from time to time when I try something longer and interesting. Don't be scared off my English please. I use English because there is most broader spectra of my friends from other countries than Czech or Slovak. I still plan to write most of the contributions in Czech language.

At least for me this is the most beautiful place in Schwarzwald. High rocks take place above deep valley in altitude about 1000 above sea level. The best way how to get to the rocks is to drive car through the Oberied and few kilometers after there is small parking place attached to the bus station on the left side in direction to Todtnau. Then one has to walk about 400 altitudinal meters up in direction of Feldberg. 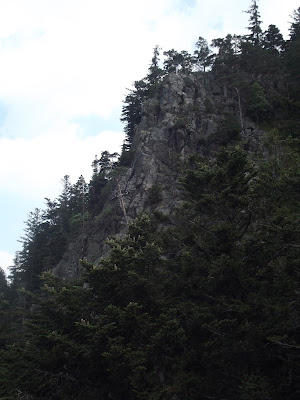 One can find very nice topos drawing on this page:


One can see that there is lot of easy routes and if you add them one by other you can climb something like 150 meters with only few steps in between. One very nice option is to climb standalone tower Bauremturmle really from the bottom and then rappel down, make few steps left along the path and continue from the bottom of Kapuzentrum by Kandel Hohenweg and than final part by easy Kamin. All together it can be maybe even more then 160 meters of climbing. 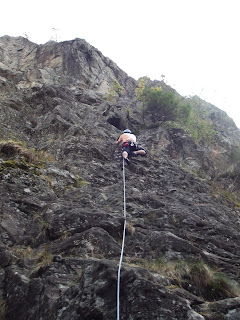 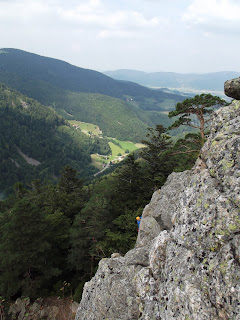 By the way "back to back" route on Bauremtrumle is little bit more difficult than 3+. At least for first climber.

Also very nice place very similar to Gfallfelsen. It is 100 meters bellow the top of the Kandel where Alps are sometimes visible. If you follow the path from Kandel you will end up before two rocks. One is on the left (south) and one is on the right (north). We climbed there only two routes so far. One approximately 35 meters long takes palace on the south rock. It is named westend and I would say it can be something like 3-4.


Second route we tried was the first route you can see from the path from Kandel. It was something like 6 so we used top rope. I don't feel embarrassed about that because we just wanted to try more difficult route which we didn't climb before.

There should be some 4- called Kandel Hohenweg which should be 55 meters long but this I haven't found. But surely we will try that next time.

Rock itself is very well secured as it is usual in Germany. Some kind of Czech punk guys could protest against that but I rather feel safe on the rocks and agree with this German style. If somebody wants to prove that is brave then he doesn't have to take all of the rivets.

There is huge bigwall above Zastler valley which is forbidden to climb because of some kind of birds. That's pity. Only bottom part is allowed and there is 20 paths to climb and even this part has approximately 50 meters. One of that routes should be also very easy, maybe 2-3 but we didn't try that. I will provide more information once we try that. 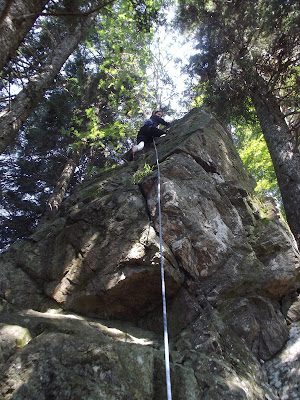 But we climbed on one unsecured rock above that bigwall close to that cottage which is there. There is more boulders around and for sure one would not regret to spend here two days by bouldering. But that place is difficult to reach from Zastler valley because one has to know the path.

Topos can be found at: http://www.rock-guide.com/index.php/klettergebiete/todtnau

Routes are very well secured, maybe too much even for me. Usually there is also lot of people due to the via ferrata which crosses whole main wall. Routes are also not that long. 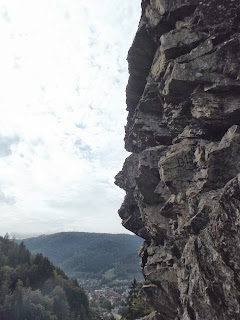 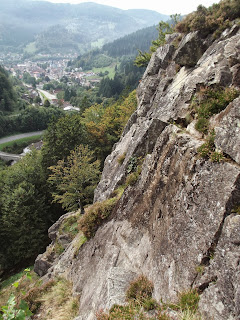 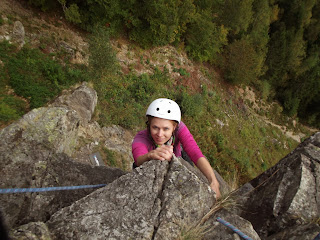 Again very nice place but climbing itself is not that nice.  There is lot of rocks so if somebody secures them I would be first who climb it all. But at the moment there is only fixation for top rope installed on only small tower which is there. This tower is possible to climb by several ways from two sites.

I will add more photos and information when I find them. 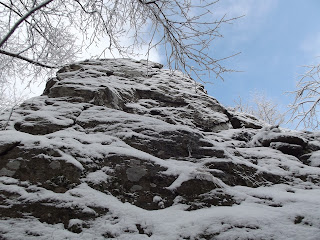 Email ThisBlogThis!Share to TwitterShare to FacebookShare to Pinterest
Labels: Schwarzwald